Home Fitness Inside the box: Training to climb a mountain 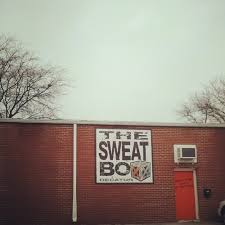 The other day, I found myself in a concrete and cinderblock, brightly lit, barely-upgraded former garage space without air conditioning, doing something called “goblin squats.” These are like normal squats, except you’re holding a dumbbell, with two hands, out in front of you. I’m not sure how this relates to goblins, but it was pretty hard. I’d brought it upon myself, of course, having asked the guys at Decatur’s The Sweat Box gym—where I was working out—to help me prepare to climb a really big mountain in Ecuador this coming January. William Johnson, the lead trainer there, had gladly obliged and designed a workout that would feel like bagging a peak right in flat, low-altitude Decatur.

The Sweat Box may be one of Atlanta’s least fancy (and also least expensive) palaces of perspiration: there are no mirrors, no Nautilus machines, and (at least when I was there) none of the pretty people in Spandex who go to gyms more to be seen than to sweat. As I mentioned, it also still looks very much like the mechanic’s garage it used to be. It does, however, have a great sense of community—everyone seemed to be friends, or at least friendly—and there’s enough equipment (treadmills, dumbbells, resistance bands, chin-up bars, a few benches) to keep you busy, but not befuddled. On the walls are positive graffiti messages (“Go Hard”). And, as with all gyms, there’s music. I requested Goodie Mobb’s Pandora station, and Johnson made it so.

After goblin squats, Johnson led me through walking pushups across the room, followed by lunges while holding a plate above my head around its perimeter, then a brutal “core hold” using a resistance band attached to one wall. I did three sets of each, my legs and stomach quivering increasingly throughout. Johnson tended to say “that’s perfect” after each of my reps, though I’m sure they weren’t, only occasionally telling me to lunge or squat deeper. At the end of the circuit, I got on the treadmill and did ten minutes at four miles an hour and ten degrees. “Time to reach the peak,” he told me. I was soaked and visualizing 20,000 feet.

When I was done, about 45 minutes after the whole virtual climb began, Johnson brought me over to his desk and pulled out the gym’s pièce de résistance: something called an ‘Elevation Mask.’ “This is for when I really wanna feel some pain,” he told me, smiling and letting me look at it. The simple, gas-mask-like device inhibits the inflow of air, which makes doing anything harder. Especially exercise. In mid-summer, Johnson could only manage to run around the block a few times when it was at the “18,000 feet” setting. “Maybe next time,” I told him.