Home Against the Odds Ironmen brothers inspire other athletes with disabilities 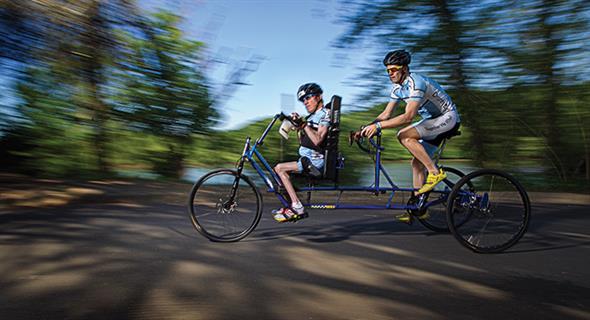 Kyle Pease laughs when he sees the picture of him and his older brother, Brent, at the 2011 Charles Harris Run for Leukemia. In the photo, Kyle, who has cerebral palsy, is wearing a golf club cover on his left hand, and there’s a blue bed pillow behind his head in what looks like a toddler’s jogging stroller.

“We had no idea what we were doing,” Kyle says.

Now when the Pease brothers run together, Kyle is decked out in high-performance athletic clothing and is strapped into a specially designed wheelchair, which Brent pushes using aerodynamic handlebars. For triathlons, they also use a customized tandem bicycle and a sort of tethered kayak.

The two men finished their twenty-seventh race together in March when they completed the Publix Georgia Half Marathon with a per-mile pace of six minutes and fifty-three seconds. That’s about ninety minutes total, and less than nineteen minutes behind the winner—who wasn’t pushing a wheelchair.

More important to the Pease brothers, though, is another number from that day: Sixteen adults and children in wheelchairs joined them for the race, with family members and volunteers pushing for the 13.1-mile course. All of them wore T-shirts from the Kyle Pease Foundation, which raises money for scholarships, medical equipment, adaptive sports equipment, and other assistance for people with disabilities. The foundation, which Kyle and Brent—whose day jobs are in customer service and coaching, respectively—started in 2011, also creates awareness about cerebral palsy. The disorder’s severity can vary; some people can walk, while others might experience epilepsy, blindness, or deafness. Kyle has been a quadriplegic since childhood.

Their mother, Janis Pease, remembers waking up one Saturday when Brent was five years old and Kyle and his twin brother, Evan, were three. She was surprised they’d let her sleep so late and went to look for them. They weren’t in their bedrooms. Turns out Brent had carried Kyle down the stairs. Says Janis, “Brent has always had a tremendous amount of tenderness in his heart for Kyle.”

When the boys would play baseball with their friends, Brent was determined to find a role for Kyle, so he became the umpire. And when Brent began running, Kyle cheered him on.

Something changed for Kyle in 2010 when he watched Brent compete in his first Ironman triathlon, a grueling 2.4-mile swim, 112-mile bike ride, and marathon 26.2-mile run. He decided that he wanted to participate in races himself. “People were in tears, people were elated. It just sparked me to become an athlete,” says Kyle, now twenty-nine. “Watching the athletes in that particular race, just giving it their all—that’s really how I approach my life.”

This article originally appeared in our Medical 2014 issue under the headline “The Pease Brothers.”