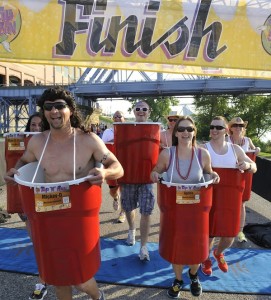 I once ran a popular four-mile race—for a magazine story, I swear—that required eating a dozen doughnuts at Mile 2. (They were the hardened Krispy Kreme glazed variety that had been sitting around for about twelve hours.) Though my stomach was certainly impacted by the sudden doughy tumor, my time wasn’t actually that much worse; I was a little more than a minute slower running the same two miles with the doughnuts in me than I’d been without them. Of course, that might have been because I knew there was a Porta Potty at the end.

These days I steer clear of what was once my favorite late-night snack, and I usually run on an empty stomach. Still, I find myself running (occasionally from someone, or as part of an annual St. Patrick’s day pub run, but more often late at night to sober up) with alcohol in my system, once in a while. The effects of doing so have been debated many times over the years. Sure, writes the Running Times, looking hard for an upside to tipsy traipsing, “there’s an undeniable psychological component to alcohol consumption. Alcohol can boost spirits and reduce stress. There are plenty of runners who routinely have a beer the night before big competitions and manage to run great races.” But more often than not, it’ll hurt you in a physical way. “Because of the way alcohol is metabolized,” writes Runner’s World, “most of these excess carbs [in beer] are stored as fat.” So you’re essentially fat-loading when you drink before a race. May as well do that at Fat Matt’s.

Over the course of the next two weeks—once a neck injury from a game of pick-up basketball heals—I plan to do a very unscientific survey of the effects three liquors have on my modest running ability. Specifically, I will test rum, bourbon and gin. Mostly because those are the only liquors I really like, and keep. I encourage those of you out there old enough to drink (and young enough to run afterwards) to give it a shot, too. At the very least, we’ll get in good enough shape to join the Atlanta Hash House (“drinkers with a running problem“) on a local drink-and-jog.

Send your own drinking data, and any publishable before and after pictures, to charles.bethea@gmail.com. Cheers!