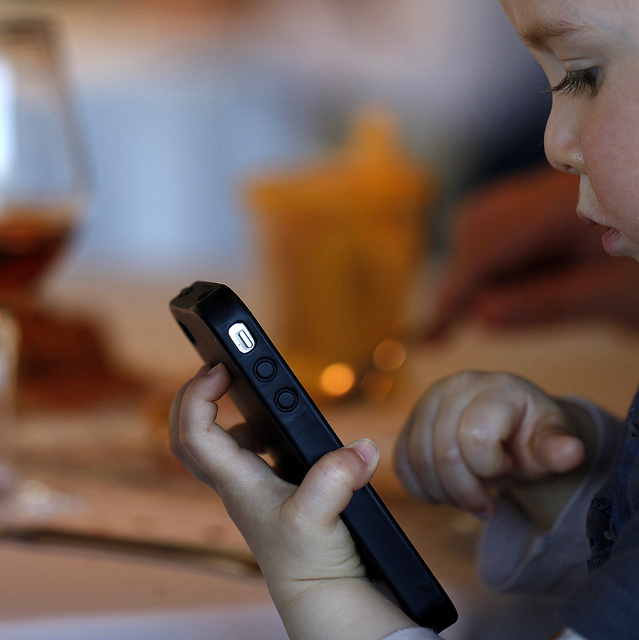 Are your kids glued to their phones and laptops and video games? Of course they are. Like your mom would say, get them outside for some fresh air or something.

The American Academy of Pediatrics released a new policy about screen time and children, saying too much time in front of electronic media can contribute to numerous health risks, including obesity.

The AAP recommends that children under two have no screen time whatsoever. So stop handing your toddler the iPad or even turning on PBS while you try to take a conference call or make dinner.

For kids older than two, even teenagers, the AAP says no more than two hours a day. That includes keeping TVs and any wireless devices out of bedrooms and “co-viewing” TV, movies, and videos with kids and teens as a way of discussing family values.

To find out if this is even remotely realistic, we checked in with Dr. Stephanie Walsh, medical director of child wellness of Children’s Healthcare of Atlanta. And, yes, we did it via email.

Only two hours? What about the time kids—especially teens— have to spend on computers to do homework?
When we talk about limiting screen time for kids, including teens, what we are really talking about is the time above and beyond school work and homework. Keeping in mind how much screen time kids now spend on school work alone, it is more important than ever to be mindful of how much additional screen time you are permitting them.

Why shouldn’t kids/teens have computers or phones in their bedrooms? Is it about sleeping or about what they do when they have unlimited use of the Internet?
When kids get enough sleep, they not only eat better, they’re able to learn better, handle emotions, and be more active during the day. One of our roles as parents is to ensure our children get enough sleep. When your kids were babies, you worked hard to get them on a good sleep schedule. But as kids get older, parents often stop paying as much attention to sleep—but we shouldn’t.

Screen time is linked to irregular sleeping patterns and disturbances in children 6 to 12 years old. This is why I recommend turning off all screens—TV, phones, handheld devices, etc.—30 minutes before bedtime. Not only will this help kids begin to settle down for bed, it’ll also help limit their overall screen time for the day. Additionally, I suggest banning hand-held devices from the bedroom. The burst of light from a phone, even if it’s just to check the time, can break a sleep cycle.

How do you wean a kid off technology?
First and foremost, parents should be a good role model. You should lead by example and encourage, but don’t shame, your kids to do the same. Here are four small steps that parents can try to implement tonight to help limit their child’s screen time:

• Turn off all screens 30 minutes before bedtime.
• Ban hand-held devices from the bedroom.
• Replace screen time with activity: It’s hard to get kids off the couch and get them moving, especially if they think of physical activity as “exercise” or “boring.” Sometimes we need to get creative and make moving fun for kids. (Walsh suggests these ideas for fun indoor and outdoor activities.)
• No screens during meals: Being distracted by phones, handheld devices, and TV shows during mealtime can not only lead to overeating, but additional unnecessary screen time. Use mealtime instead as an opportunity to connect with your family.

Still not convinced? Check out CHOA’s Strong4Life wellness site. Digital Detox facts might scare you enough to at least turn off the TV occasionally.

• An average 8- to 18-year-old looks at a screen approximately 7 1/2 hours a day. That’s the equivalent of 114 days a year.
• The average child consumes 18.5 grams of fat (or 167 calories) for each hour of television watched.
• Kids who watch more than three hours of TV a day are at high risk of poor homework and grades. They also have a more negative attitude towards school.
• Video games are linked to increased food intake and weight gain, and 97 percent of kids play them regularly.
• The average age for a child to be exposed to TV is 9 months old. By the time they are three, one-third of children have a television in their bedroom.