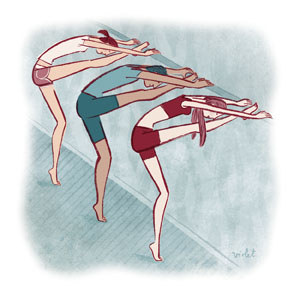 The latest and most ab-assaulting workout to arrive in Atlanta is Lift, an exercise class built around the ballet barre. Run by UGA alum Lindsey Daughters and operated out of Buckhead’s sleek Terminus Club, Lift derives its moves from Pilates, yoga, and ballet to yield the most refined core workout in town. The hour-long program progresses from gentle mat stretches to strenuous exercises at the barre. Participants lift everything—arms, legs, whole bodies—as Daughters’s voice booms around the room: Lift. Lift. Lift.

For one routine, I put a leg up on the barre and, with the other, alternated from toe to flat foot and back again—all while maintaining perfect posture: shoulders down, leg straight, everything facing forward, core tightened and activated. And then we did the other side. For the final routines, I could barely hold my legs an inch above the ground, but it paid off. Just one class and my abs looked better than they’ve looked in a year.

Barre-based workouts have been around since the late fifties, when a German émigré incorporated barre techniques in her London exercise classes. The concept crossed the pond in 1971 and got hot in the early aughts with the openings of San Francisco’s Dailey Method and Bar Method; celebrity acolytes include Drew Barrymore. Daughters, who worked on the trading floor at Morgan Stanley, taught courses part time at Dailey after earning her license there. After moving to Atlanta and discovering the city had no such offerings, she opened Lift in April 2009 out of her fiance’s Westside home. In March, she used her business savvy to shift the class uptown.

Because each class is capped at twelve people, Daughters can focus on each participant, so even the uninitiated can get up to speed. You don’t need Terminus Club membership to get in, but you do need $20—and an outfit from Lululemon Athletica wouldn’t hurt. You also don’t need two X chromosomes, though flexibility is helpful, and excelling in the course does depend upon that essentially feminine trait of endurance.