Home News & Opinion From the Magazine Mapping the exposome 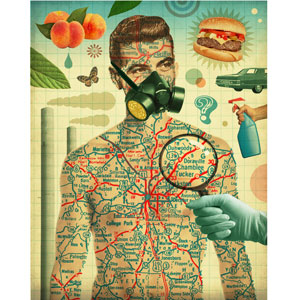 Researchers at Emory University and Georgia Tech have joined forces to study the “exposome”—a measure of the environment’s impact on health. The partners received $4 million, the first exposome-centric grant awarded in the U.S., to establish HERCULES. (The acronym covers quite a mouthful: Health and Exposome Research Center: Understanding Lifetime Exposures.) Based at Emory, HERCULES is funded by the National Institute of Environmental Health Sciences and includes thirty-eight investigators from Emory and Tech. We asked center director Gary W. Miller, professor and associate dean for research at Emory’s Rollins School of Public Health, to explain the exposome concept.

Just what is an “exposome”? Think of it as the environmental complement to the human genome. Our genome describes the genetic variations we have, while the exposome describes the totality of environmental exposures we face. There is some debate as to what should be part of it. I have a broad view and think about air pollution, diet, social stresses. It’s almost a way of looking at what “nurture” is. It’s a very complicated idea.

Is it a relatively new concept? The term was coined a few years ago, but because it was so hard to define, people would say, “That’s a neat concept, but how would you study it?” So the discussion would kind of end. But with two grants awarded by the European Commission and the HERCULES Center, three big groups are trying to tackle it. I see it as baby steps. You can’t think of the influence of air pollution and not think about your diet or what’s happening in your household. You can’t think about treating a disease like diabetes without thinking about pesticides. We have a lot of control over our destiny through environmental factors.

Are there any particular stressors that might factor into an Atlanta exposome? Absolutely. We have a very unique diet in the South that has higher levels of fat and chemicals that are fat-soluble. We’ve done a good job over the last decade or so regulating air pollution, but we still have a lot of cars and people spend a lot of time commuting. There’s an Emory study monitoring people driving and exposures they have when commuting—traffic and ambient air exposure, plus the stress of driving.

What do Emory and Georgia Tech each bring to the table? Clearly Emory has a very strong public health and medical science background. When it comes to Georgia Tech, we’re playing on their engineering and computational biology expertise.

What’s the goal of HERCULES? The design is to foster new ideas and new projects; we’re already working on new proposals. I’ve had contacts from people across the world.