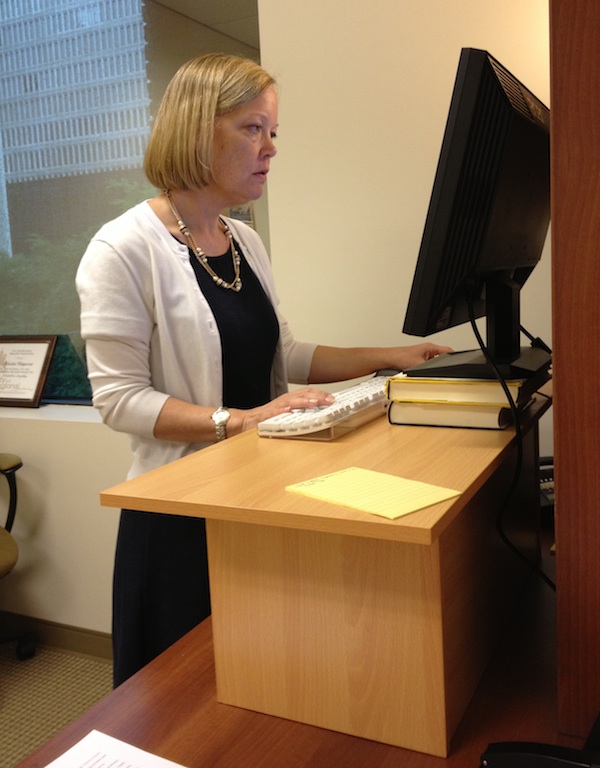 My yoga instructor used to say that it takes three weeks to form a habit and three weeks to undo a good behavior. I’m not sure what science, if any, was behind that claim, but over time I’ve found that to be a pretty good rule of thumb.

So now that I’m fully into a third week of standing at work, I can say that it’s becoming pretty routine to walk into the office, switch on the lights, and log into my computer without first sinking into a chair. I’m no longer thinking about standing—just doing it.

And my coworkers are getting used to it as well.

“Still standing, huh?” they will remark as they walk past, not even waiting for my responding “Yup.”

Last week an editor took a new intern around to introduce her to the magazine staff. The editor stood in my office doorway chatting for a full two minutes before either of us noticed the intern’s polite-yet-askance deskward glances.

“Oh, that,” she said. “Rebecca’s experimenting.”

“I see,” said the intern, a little skeptically.

Skeptics might do well to note a new Princeton study—handily recapped at Atlantic Cities—which notes a possible connection between being sedentary and being prone to anxiety. Granted, the researchers compared mice that regularly worked out on exercise wheels with a group that just lazed around their cages, and they measured anxiety by dropping said mice into cold water: The rodents that exercised were less stressed than those that sat around eating kibble all day. Being plunked into an icy bath by a Princetonian would make me pretty anxious, too, but less so than facing a bottleneck of deadlines or having to drive on the freeway during a thunderstorm. The point being anxiety among sedentary office workers can’t be measured in quite the same way as in lab mice. Still, something to ponder.

In the meantime, I am pondering the best way to elevate my desk at home. It’s no longer a question of if, but how.

The experiment so far by the numbers:

Average motion increase during the workday: 1,000 steps (But since starting to use a Fitbit to track my workday motion, I opt for stairs over the elevator more frequently—including the ninety-six steps to my fourth-floor loft—because it’s rewarding to see them tracked on the Fitbit screen. So that’s a plus.)

Cumulative standing-related, non-budgeted expenses: $77 (In addition to a cushy mat, I bought a clearance-priced pair of leopard-patterned ballet flats and am on the lookout for more flat footwear.)

Estimated likelihood that I will come up with a home standing-desk solution: 100%

Estimated likelihood that I will use a freelance project windfall to purchase a desk treadmill: 10%