Home Fitness Taking a Stand: Could simply sitting less save your life? 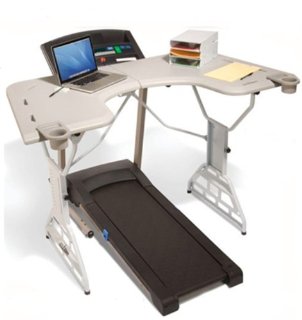 All kinds of things put our health at risk. But unlike the obvious dangers of smoking, booze, or reckless driving, one of the worst threats is just . . . sitting still.

When we sit—which most of us do for six or eight hours in front of our work computers and then for a couple more hours on our couches at home—we lower our metabolisms, raise our blood pressure, and increase our risk of heart disease. People who spend more than four hours a day in “recreational screen time,” which is what you and I would call channel surfing or playing video games, have a 50 percent higher death risk than those who clock less than two hours daily. And it’s not just TV junkies in peril. Here’s a sobering warning posted at the Mayo Clinic site by Dr. James Levine, a pioneer in the field of “inactivity” research:

Sitting in front of the TV isn’t the only concern. Any extended
sitting—such as behind a desk at work or behind the wheel—can be
harmful. What’s more, spending a few hours a week at the gym or
otherwise engaged in moderate or vigorous activity doesn’t seem to
significantly offset the risk.

Back in the early 2000s, Levine first detected the dangers of being a couch (or desk) potato when he looked at why some people gain weight and others don’t. Basically, the people who stay slimmer move around more; not in the obvious ways like two-hour spin classes or endless jogs, but simply squirming, fidgeting, pacing, and, well, not sitting still.

And sitting isn’t just a way to add (or keep on) pounds; it’s also outright harmful, Levine and other researchers have learned. Reports at the 2011 American Institute for Cancer Research annual meeting underscored that lack of activity is connected with cancer, and that just getting a daily allotment of exercise doesn’t stave off effects of being inactive most of the day.

I didn’t really need Levine’s research to convince me of the perils of excess sitting; I’ve experienced the evidence firsthand. After a move two years ago, I traded my commute by MARTA for a quick drive. Before, I’d walk a mile to the station, stand on the platform waiting for the train, stand on the train for the ride into Downtown, walk to the office, and repeat those steps at the end of the day. Because the move also came with access to a nifty workout room, I swapped the walk to and from the station with time on the treadmill and elliptical. By all measures—and the calorie readouts on that equipment—I should have stayed in the same shape, maybe even dropped few pounds. But the scale hasn’t really budged and my thighs, always problematic, look even more like they should be supporting the Pillsbury Doughboy. Is giving up the hour or so daily that I spent standing at a MARTA platform and on the train really what made the difference? And if so, what can I do to replace that?

As someone whose livelihood depends on sitting before a Mac all day, I wasn’t immediately sure of what to do with this realization. But here’s the easy answer: Stand in front of that screen.

The publication of Levine’s research—and an April 2011 New York Times magazine story “Is Sitting Lethal?”—has led to a mini boom in standing desks, and now, desks with built-in treadmills. (Levine consults on a line for Steelcase).

I perused everything from the ultraluxe Steelcase models with built-in treadmills, around four grand, to the mid-range TrekDesk (pictured, $479, treadmill not included) and some fancy adjustable models, including VersaTable’s electric version (starting at $829, it goes from seated to standing height with the push of a button). In the end, I ordered a cheap and easy-to-install desk riser from Amazon.

Curious as to how much (or little) I move around during an average, mostly seated, day at the office, I tracked my movements using a Fitbit, and saw that I logged just 3,600 steps during a regular workday, or just over a third of the recommended daily 10,000. It would take a lot of treadmill time to make up the balance.

That low figure surprised me. I’m a fidgeter and make a point of getting up to walk around the office regularly, a habit I formed deliberately a few years ago after learning that I have a genetic mutation—called factor V Leiden—that is linked with blood clotting. Basically, people with “factor five” have thicker-than-usual blood, and we’re advised to avoid sitting or standing for long periods; it makes the blood pool in your legs, which can make clotting more likely. Since I’d been warned about both sitting and standing, I asked my doctor if standing at work would be a problem. No, she said, and in fact it would probably be better to stand, because it would make it more likely that I’d move around.

With my doctor’s clearance and a desk riser on the way, my standing experiment is underway.