Home Healthy Living Taking a Stand: If you’re standing at work, get ready for distractions 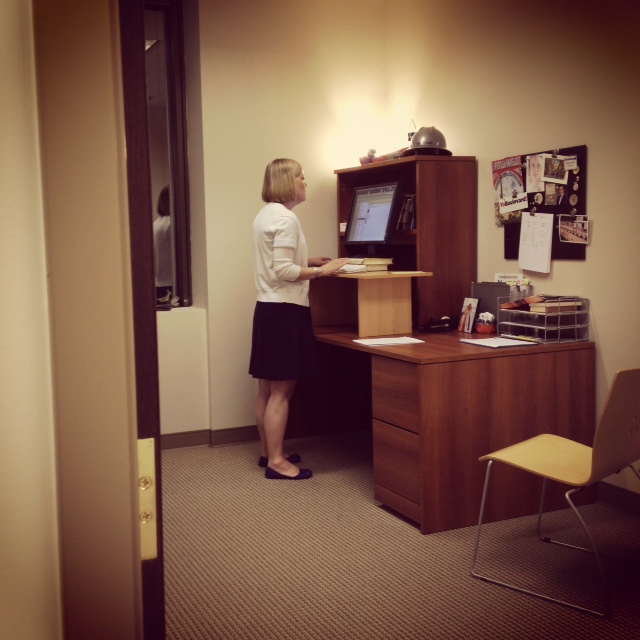 A full week into my standing-desk experiment, I’ve got one definitive piece of advice for anyone who might adopt this lifestyle change: If you are going to stand at work, don’t start when you’ve got a big project due. Everyone, and I mean everyone—from your boss to the office manager to the interns—will do a double take while walking past your desk, then feel compelled to double back to discuss your newly odd behavior. At length.

I installed my desk extension the day of a major article deadline, and thanks to a steady stream of visitors, curiosity seekers, and commentators, what should have been one day spent tackling revisions stretched into two.

Some observers were benignly banal. “Hey, you’re standing!” they would remark. Resisting the temptation to respond sarcastically—“Oh, I hadn’t realized; no wonder my calves are sore.”—I would merely smile back with an equally inane, “Why, so I am.”

Others passively-aggressively pointed out that some people don’t just stand, but also walk while they work. “Did you know Susan Orlean has a treadmill desk?” Yes, I know. Susan Orlean also is a bestselling author and writes for The New Yorker and knows how to snowboard. And was played by Meryl Streep in the movie adaption of her book The Orchid Thief. Maybe I should just give up like the underachiever I am and sit down already.

Still others wanted to get into the nitty-gritty. They would stand in front of my monitor, test the keyboard —“Hey, you’re left-handed!”—and delve into specifics. “How about stretching?” “What are you doing to strengthen your core?”

So, all in all, not the most productive couple days of my working life.

On the plus side, all the interruptions distracted me from the fact that, you know, standing is harder than you think. It gets pretty tiring. Your feet get sore. Your back does, too. None of which I realized until day four, when co-workers who had stopped to chat at length just breezed by with a quick “Ah, still standing!” leaving me to contemplate my achy ankles in leisurely solitude. As I head into week two, some stretching and core-strengthening will be on the agenda.

A few other quick notes: