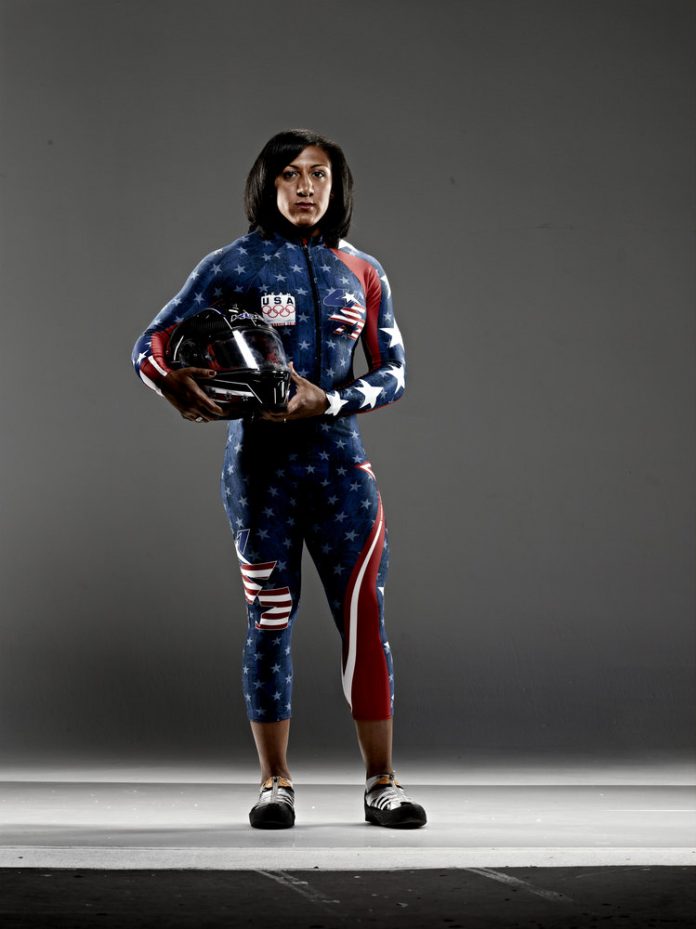 Elana Meyers, a cheerful 28-year-old from Douglasville, is the top-ranked female American in her sport. Granted, most of us have never attempted this sport—the bobsleigh—and are most familiar with it, if we’re familiar at all, through a Disney film starring John Candy. Nonetheless, she is a world-class athlete with a resumé that includes an Olympic bronze medal in 2010 and a silver and gold at the World Championships this year. A few days ago, I held the 1.2 pound bronze medal in my hands, and was briefly inspired to take up the sport. Alas, I’m not built for it.

Meyers only began bobsledding in 2007, but had a few advantages from the start: she’d inherited the powerful and explosive lower-body build of her father, Eddie Meyers, a former marine who played running back for the Falcons in the mid-eighties. Meyers had also excelled at softball, basketball, soccer, and track in high school and college. (She has played professional softball and had hoped to one day compete in the sport in the Olympics, before it was removed.) Like her, most bobsledders come from another, more traditional sport. To be a bobsledder, you must have access to a bobsled course, of course, which don’t exist in Georgia. You also need a bobsled, which are expensive. The U.S. team, she says, just invested in BMW sleds that run roughly $100,000 each.

The economics of the sport, which she became interested in after her parents saw it on TV one day, are difficult: she has a part-time job to help pay for her coach and some of her gear, and is pursuing a master’s degree in business administration from DeVry University. But the patriotic glory she felt in Vancouver was well worth it. Plus, she really loves to work out, which has as much to do with her success as any genetic gifts. “I inherited my dad’s military discipline,” she says, smiling. “I never get bored of working out.”

Recently, Meyers invited me to her parent’s large house in Douglasville, where she stays and trains when she’s not doing the same at Lake Placid Olympic Training Center, or competing internationally. The basic idea was for me to do an off-season bobsled training routine with her. I had no idea what this would entail, and was given no hints, but showed up ready for just about anything. Meyers, decked out in spandex, took me down to the basement gym where her dad trains; the walls are covered with images of his playing days, as well as posters congratulating her on medalling in 2010. The workout began and ended in this home gym, with a forty-five minute stint in the backyard in between. It didn’t feel terribly hard as I did it, but I was sure hurting the next day.

After five minutes on the treadmill, at eighty percent effort, she led me through a series of yoga poses, as well as push-ups, then we headed outside for an hour (counting enjoyably talkative interruptions by dad, Eddie, who, he said, could bench press 505 pounds in his prime!) of skipping, high-knee running, one-legged hopping, long-jumping, and sprinting in the midday heat. Winning at her sport requires great balance: you can’t have the bobsled move side-to-side down the ice. So everything we did outside involved either balancing, bursting speed, or both. For example, we did a sort of high-knee Russian dance move with our arms folded, which had me zig-zagging off-kilter. Also, I tried but could not beat her during any of the thirty-yard sprints.

At last, Elana signaled that it was time to go back inside. In the cool basement, she pulled out a stool-like thing that stood about two feet off the ground and we proceeded to jump up on top of it, again without using our arms for balance, twelve times. Then we put our backs against a wall, bent over slightly forward, and held a heavy weight straight out in front of our faces, turning it quickly like a wheel. Somehow, this very difficult move (a “weighted foundation pose”) mirrors a bobsled maneuver. Finally, we did a set of “eccentric high hang full cleans” with a barbell, which looked something like this. This one left me sore for days.

Afterwards, around two p.m., she allowed herself to finally eat something. Nothing with sugar, though: she hasn’t touched that stuff in five months.

Meyers will be one of the favorites in the women’s bobsled at the 2014 winter Olympics, held in Sochi, Russia, this February. Whether or not you attempt to do any of the above, cheer her on. As it turns out, being an Olympic bobsledder is no Disney affair.

For more information on Meyers and the Olympics, visit NBCOlympics.com or TeamUSA.org.