Home Doctors What It’s Like To: Bring Someone Back to Life 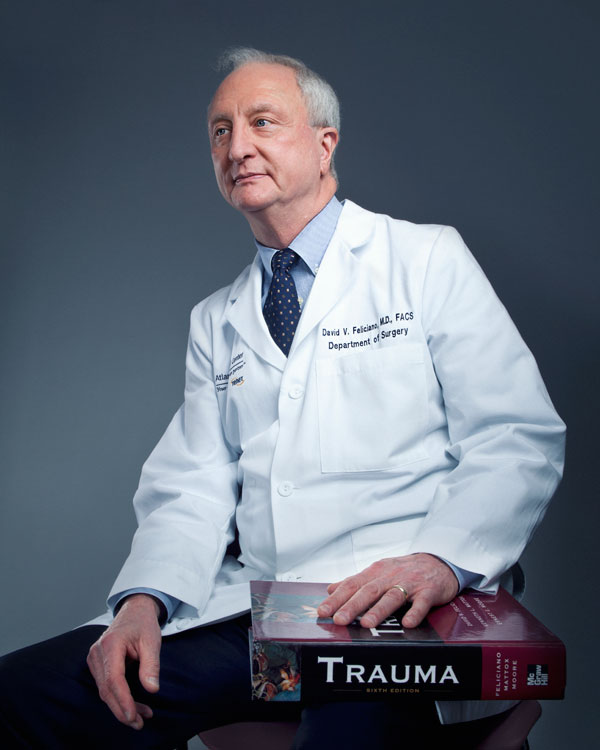 In 1993 David V. Feliciano received a phone call in the middle of the night from a surgical resident at Grady Memorial Hospital about a patient who had been stabbed in a robbery. The resident sewed up a hole in the heart, but called Feliciano again when the liver began bleeding uncontrollably. The patient was dying.

I quickly drove to Grady and found a patient whose body temperature was very cold. He was about 34 degrees C (93 F). It’s usually 37 degrees C (99 F). That’s a huge drop in temperature, just huge. When the body temperature’s low, the blood doesn’t clot. We had a cold patient, we had a hole in the heart that was fixed, and the left lobe of the liver was bleeding profusely.

Recognizing the patient was on the verge of death, we stopped [the operation]. We got some dry gauze pads and packed his liver to control the bleeding. We then sewed a temporary closure like a plastic bag onto his skin to [protect his abdomen]. We just used some clamps on the skin on the chest to close him.

In those days we didn’t understand the concept of damage control very well. We should have waited a couple of days and let the swelling go down. Instead I took him back to surgery the next day [to address the damage to the liver and remove the packing]. As soon as I took the bag off, his heart stopped.

I had to reopen his chest—take the clamps off. I started to massage his heart. But his heart was actually in asystole, which means it wasn’t fibrillating [beating].

I got very angry with God because this man had already survived a very catastrophic injury the night before; we’d done everything right to get him back to surgery the next day, and his heart stopped. I never forgot that moment. I was so angry.

Sometimes that helps you in surgery if you get angry. We did internal cardiac massage for twenty minutes. You put your hand over the heart and just squeeze the heart. You inject a stimulant directly into the left ventricle. The drug immediately goes into the coronary arteries and helps stimulate the heart.

The heart gets boggy and swollen. It feels very thick and heavy. You can feel it’s not normal. You’re hoping electrically it will recover enough to start on its own.

It was emotional. He already survived the night after the big operation. He was a younger man. They have incredible recuperative powers. They need good doctors to keep them alive. I just had a feeling that I should stay with him. Often the heart will have sort of a non-regular way of restoring itself. Part of the ventricle will start beating, then a sort of wave goes through the heart, then it starts beating again.

Most people in the field feel we get [divine] help on these really near-death patients. Under the pressure of the moment, you can’t do everything perfectly. And there’s incredible stress, a lot of people involved to take care of these patients.

I don’t think there’s any question some of them have extra help. I’m not a deeply devout person, but I’m an absolute believer in this. —As told to M.C.M.

The patient sends Feliciano a Christmas card every year.