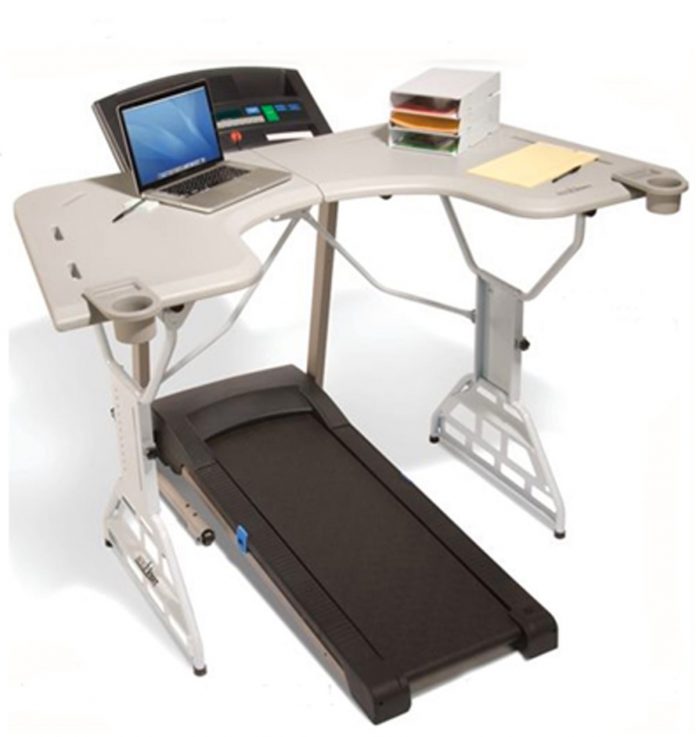 A lawyer friend of mine works an insane amount of time at his downtown Atlanta office. Among other things, he bemoans how bad sitting at a desk is for his health and physique. One day, he got the idea that he could exercise while working at his desk. We, his friends, all laughed; he was full of crazy ideas like this. And then we (or at least I) began to think that he was onto something. Yeah, it might look odd if a client showed up and he was sweating in his Brooks Brothers suit, wearing FiveFingers running shoes and a tie, doing bear crawls over a case file. But surely there was a way to incorporate a bit more movement and blood flow into the act of lawyering, if not all kinds of primarily mental work.

Jefferson, Churchill, Hemingway and Frost all used standing desks to do much of the labor for which they became famous. (I especially like the image of Sir Winston working upright while chomping on his cigar—which undoubtedly negated all the health benefits of standing.) But standing is to exercise as golf is to sport: only halfway there. In this brave new world of oddball and doctor-disapproved exercise regimens—where people use electric shocking belts in their desperate attempts to develop six-pack stomachs—there must be a product that can help sedentary lawyers fulfill their office-bound dreams of chiseled bodies, right?

The TrekDesk looks, at first glance, like the answer: you attach this powder-coated steel desk to any old treadmill (with lots of screws), set it to one mile per hour or less (remember: you’ve never drawn architectural plans while moving before), and then get to bouncily typing, reading, or whatever it is that you normally do from eight to eight. I don’t know anyone who has used it, however, and doubt I’ll be the first: the TrekDesk costs about $500 and has received mixed reviews due to its perceived instability. But I like the spirit of the thing. And it got me thinking about other exer-work (work-a-cise?) options. Here are my top three:

2 – Bounce-a-boss: Get out all that office frustration with this bouncy ball shaped like your boss’s head. You can sit on it, do abdominal work with it, and kick it in its condescending, ungrateful teeth. You’ll be less likely to burn down the building and look better in that summer suit!

3 – Bean-counter-grinder: We all need to drink coffee sometimes, thanks to long hours on the job and little sleep. Sure, you can lazily buy that pre-ground stuff, or grind your beans with one of those dangerous little machines. But why not try grinding with your bare hands? It may take much longer—it may even take forever—but isn’t that true of the rest of your work, too?