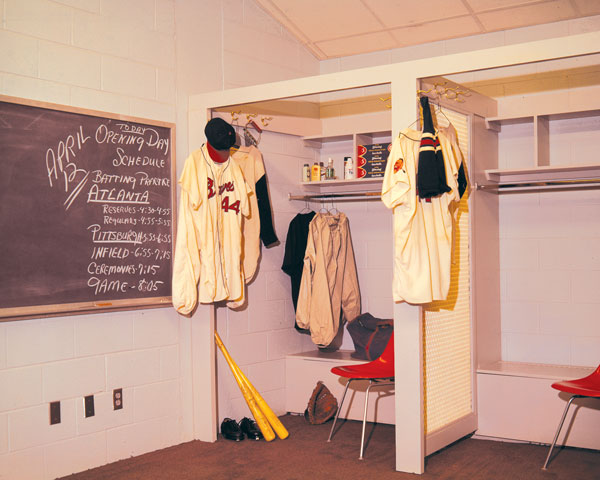 The night before the first braves game played in Atlanta, general manager Dick Cecil called Atlanta Journal sportswriter Lee Walburn: “Want to join us for batting practice?”
Walburn raced to the stadium and was at home plate “before the players strapped their jocks on.” And so, with soon-to-be announcer Ernie Johnson pitching, Walburn hit the first ball in Atlanta Stadium, a line drive into left field.
“Of course, the next night Tommie Aaron hit the first home run in the Atlanta stadium, and that’s what history will record,” says Walburn. Tommie and big brother Hank played that April 9, 1965, game in Atlanta—an exhibition outing against the Detroit Tigers—as Milwaukee Braves. Although Atlanta won the franchise in 1964, legal disputes kept the team tied up in Milwaukee into early 1966.
The Atlanta Braves played their first official season opener on April 12, 1966, losing 3–2 to the Pittsburgh Pirates in front of a sellout crowd in a thirteen-inning game. The starting lineup included Hank Aaron in right field and Joe Torre as catcher. The first pitch was thrown by Mayor Ivan Allen Jr., who had led efforts to bring big league sports to Atlanta, famously saying the stadium was erected “on land we didn’t own, with money we didn’t have, and for teams we had not signed.”
Nine years later, Hank Aaron would hit his record-setting 715th home run in that stadium. It was a moment that Walburn—who went on to become PR director for the Braves and, in time, editor in chief of Atlanta magazine—would write about decades later: As Aaron “circles the bases with the same casual gait he’s used 714 times before, nearly 54,000 of us rise from our seats like a giant ocean wave churned by a sudden gust of  wind.”
Photograpy courtesy of the Atlanta History Center
This article originally ran in the April 2011 issue
Advertisement