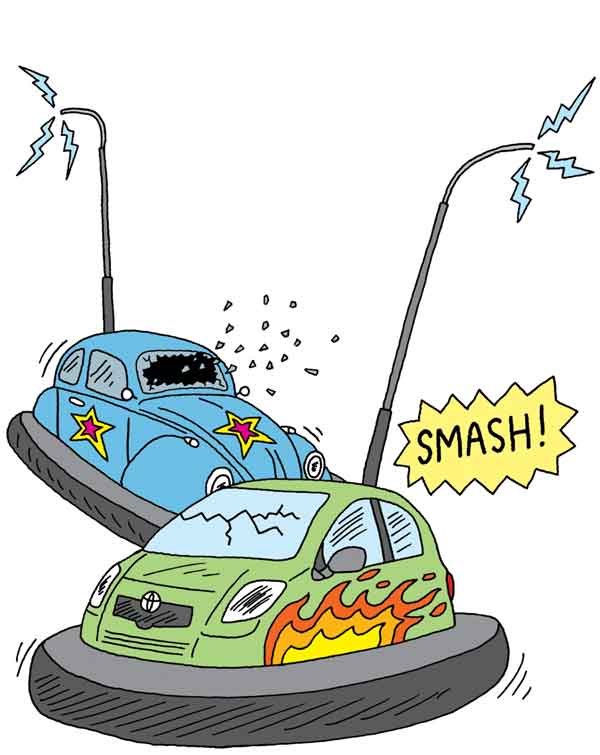 In a few months I will be wreck-free for a decade, which is why I thought it would be safe to buy a new car. This is a big step, since there was a time when the echo of crashes resounded in my life. In fact, as a teen I once got into two wrecks in one day. Neither of them was serious, nor were they even my fault—if you don’t count the fact that I drove a tiny ’69 VW Bug that was evidently a crash magnet, on account of how many other cars kept running into it. Eventually I drove it to Atlanta, where today, many cars later, I’ve settled on a tiny Toyota Yaris. It’s a clown car, really. Two doors, nothing digital on the dashboard, and wheels like pie plates. It’s so small that it looks like my last car gave birth to it. It’s so small, in fact, that I’d almost be embarrassed to be seen in it if I thought I could be seen in it, it being so small and all.
My father would have hated this car. “You need something with thicker metal,” he would have said.
He was a used-car salesman, and a perk of his job was that he was able to bring home the car of his choice off the lot each night. But he sold only American models, not the small European kinds that I craved. I was saving my waitress tips for a Triumph TR6 until one night, soon after I got my driver’s license, I witnessed a car crash. The car didn’t run into anything, mind you, but instead somehow crashed all by itself. I have to say it was a curious sight: the one car, a small convertible, flipped over and skidding down the freeway in the opposite direction of traffic, and people running toward the driver, a young girl, who lay on the side of the road with her skull punctured as if by a big can opener.
“What do you expect with no metal around you?” my dad said when I described the scene to him. He had chosen a Buick Regal to drive off the lot that day and had stopped to drink a half dozen beers at his favorite bar on the way home. If he hit anything, he would not have felt it, which was probably the point of the thick metal: to buffer the weakness within.
At the time, my mother had recently divorced him, and he lived in a tiny efficiency apartment next to the Los Angeles airport while my mother lived in a large condo 120 miles south next to the San Diego airport. When I was old enough, I spent my time driving between the two. The only thing their respective places had in common was the constant roar of large engines. I remember regularly mistaking the sound of landing planes for the sound of crashing ones. It was the late seventies, after all, and jet planes were just big Winnebagos with wings back then—creaky, lumbering things full of redundant wiring and cockpits more complicated than the Apollo spacecraft. When the pilots would raise the wing flaps to create air friction upon their final approach, it sounded from the ground as though the machine was reluctantly falling from a high altitude. Then one day, while I was expecting the planes to crash, one of them actually did.
After that, crashes continued to resound in my life, it seemed. For example, take the day the two large cars collided with my small one as I sat at a stoplight in front of my father’s car lot. As far as crashes go, this was a rather minor one, and I was able to drive away dented but intact, the sound of my little engine drowned by the roar of bigger ones. If my father had been there, he would have said I was lucky and reminded me that if my car were bigger and thicker, I could have been the one doing the denting.
But he was already gone—not due to a car crash, as I had started to fear, but because of his heart, which had somehow crashed all by itself. I was young, just having learned to drive, and I never did take his advice; to this day, my metal remains thin. But if there’s one thing that being the daughter of a used-car salesman has taught me, it’s that no matter how thick you build the shell around you, none of it matters if the engine inside is fragile.
Illustration by Peter Arkle
Advertisement