Home Uncategorized Cat’s Got My Heart 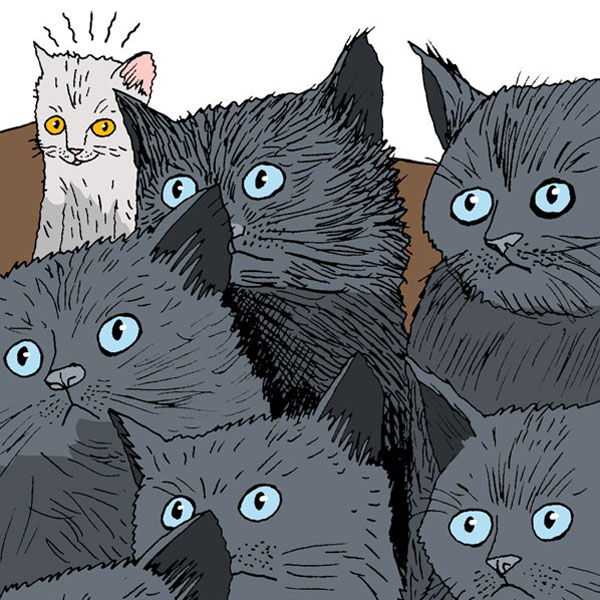 I think my cat is cursed. For one, she doesn’t appear to age, and I know for a fact that she is twenty-one years old. I picked her out after my vet gave me the false prognosis that my other cat, Lucy, had six months to live. I devolved into a blubbering wad of sobs at the news, so the vet suggested I get a “transition” cat in anticipation of Lucy’s passing. Until then, I had no idea cats had seasons. I just figured cats simply multiplied nonstop, like Tribbles on the Starship Enterprise—all you had to do to get a new one was open an overlooked cupboard and they’d come tumbling out. But evidently Lucy picked a bad season to begin faking her own death, because there were no cats to be adopted at the shelters. So, unlike the customary mongrels I keep for pets, Tinkerbell is a pedigree Persian from a breeder.
Persians, as you may know, are expensive. In keeping with my poverty, I thought maybe I could afford a defective one. When I was a kid, my mother took me to a county fair with a giant tent that housed a collection of farmyard oddities. There, preserved in a jar of formaldehyde, I saw a two-faced kitten. I had to look hard to find the other face, but there it was, a diminutive cluster of perfectly formed features on its right cheek—two sealed eyelids and a kitten nose above a tiny mouth frozen in mid-meow, wee white fangs and all. A yellowed placard on the display explained that this “animal wonder” had actually lived for a few weeks before it expired.
Today, surely veterinary medicine has progressed to the point where a cat like that could live a long, healthy life. Given that people are picky about their pedigree Persians, I thought maybe the breeder had a cat with a surplus face that would go at a lesser premium than the single-faced kittens. So that was my first question when I met the breeder at his home in Northwest Atlanta. “Got any defective discount kittens?” I asked, and the breeder, who stood before me holding a large cardboard box, answered, “Actually, I do.”
He put the box on the ground and opened it. Inside were one dozen completely silent Persian kittens. I tried to find the one that might be defective, but they all looked flawless. “Where’s the reject?” I asked. At that, the breeder reached his hand under the others and plucked up a thirteenth cat, a minuscule ball of fur that was half their size.
“This,” he said, “is Tinkerbell.”
Tinkerbell was hardly bigger than a freshly hatched chick, owing to the fact that, as an embryo, she got crowded out of prime uterine real estate by her siblings and had to gestate under her mother’s rib cage. She had shiny silver hair and bright gold eyes. Yes, you heard me right; Tinkerbell is a silver-and-gold cat. To this day she doesn’t look real. This is why I think she is cursed, because she never grew to weigh more than four pounds, she still looks like a kitten, and she’s spent her entire life bearing the squeals and clutching hands of adoring children and strangers, who pick her up, press her against their necks, and devour her cranky face in kisses. But under that kitten exterior is actually an ancient, misanthropic feline. The attention can’t be fun, but she endures it as though it’s expected of her. This is the only cat I know of that is old enough to order a drink at a bar.
Sometimes when I look into her gold eyes, I can see the weariness in there, and I wonder if it’s time to free her. But a curse to some is a blessing to others. Lately, she has taken to resting on my shoulder as I sit on the sofa. She curls at my neck—a small, silver stole, breathing like a purring bird. She has been with me through a blur of addresses, employments, and attempts at relationships. Her presence in my life has outlasted that of my own father, who died when I was eighteen. That fact alone, that I’ve known this animal longer than I knew my dad, makes losing her unbearable to consider. But think how convenient it would be if she were cursed. If she were cursed, she would have to live forever, a perpetual kitten-cat—this animal wonder—always at my side. But then I gaze into her gold eyes again—her dear, exhausted eyes—and I can see all the years trapped in there, and I know soon she will ask me to lift it for her, this curious curse. And the minute she does, I will have to do it. I will have to set her free.
Illustration by Peter Arkle
Advertisement