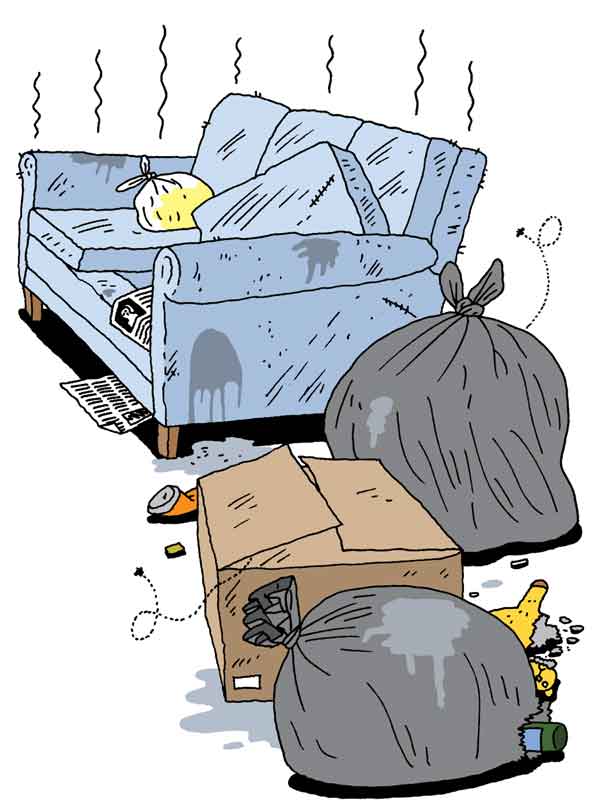 Some may think it’s a bad sign to have a broken toilet on the curb in front of your house, but I remain optimistic. It’s been there four days now, a new record for something sitting on the curb in front of my house. Last year the kitchen sink was gone before I made it back to the front door. The particle-board entertainment center went in one day, even though it was busted apart like a collapsed shack. Before the toilet, the thing that took the longest to disappear was the old sofa bed I had impulsively bought at a thrift store on Memorial Drive. It was a faded blue, with cushions as comfortable as two bags stuffed with a bunch of switchblades.

I actually tried to sell that sofa on Craigs­list. I remember it photographed a lot better than it actually looked. One Saturday morning, an entire family showed up unexpectedly to buy it. They had even rented a truck from Home Depot. I had just returned from a trip out West, so I was still in my pajamas. Also, my dog, a young mutt with the nickname “Weird Ear” because her right ear sticks up and bends over the top of her head like half a babushka, had urinated all over my replacement sofa as a signature welcome-home gesture. So the cushions from the replacement couch were propped against the fence in the front yard, drying off from having been hosed down. Normally, at the sound of the first knock on my door, I would have hidden like a fugitive until the intruders disappeared. But I have a daughter who is surprisingly very socially adjusted, and she let them in.

So there I was in pajamas, sitting on a couch with no cushions while the other couch, the old sofa bed that photographed better than it looked, crowded the tiny living room like a throwaway from a frat party. Weird Ear bounced between each like they were her personal trampolines. All the remnants of our trip—half-packed suitcases, half-masticated packets of peanuts, and hair curlers—lay around like leftovers from a burglary. And into all this came this entire other family of strangers, who seriously were about as welcome as a pack of Jehovah’s Witnesses and, it turned out, about as hard to get rid of, since they took their time finding a polite way to reject the sofa. “Get out!” I kept screaming. Granted, the screaming was in my head, but still it was loud. “Get out! Get out!” Finally, seven hundred years later, they developed ESP and left.

Thank God. Because here’s the thing: The longer they stayed, the longer that scene was in danger of becoming a definition of my life. I remember once in sixth grade when my father came to pick me up early from class after the school nurse diagnosed me with strep throat. When he got there, his breath smelled like an alcoholic blowtorch, and she refused to release me to him. I don’t know why she was surprised, since I had given her the number of his favorite bar in order to reach him. In the end, my mother had to leave her job to come get me, and that night I could hear them arguing about appearances, and how it now appeared as though I had a drunk for a dad. “They think we don’t have our house in order,” she hollered. This made me feel kinda bad, because I knew my dad was not drunk all the time, just usually during school hours. He was normally home by the time my mother got there, and he made us dinner but never ate any himself. Instead he stood in the corner of the kitchen, a Marlboro pinched between his fingers, and looked at us like he couldn’t believe his good fortune. But still, after that day, “drunk” was how he was judged all of a sudden. It stayed with him for a while, but then a bastion of the neighborhood went and shot his wife in a botched suicide pact and suddenly judgment lifted from us like a cloud. Phew.

After the family left my house that day, I pushed the sofa bed to the curb and waited three entire days for it to be taken. This one stayed longer than the prior curb castoffs, but finally it was gone. Now, months later, there’s a broken toilet in its place. It’s been there four days. I get a little worried that maybe it won’t go away, that maybe it will stay there forever, flagging my house, a monument of judgment. I look out the window. The toilet is still there. I don’t know why I worry. It will go away. It always goes away. 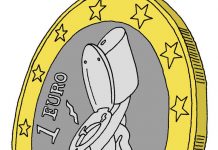 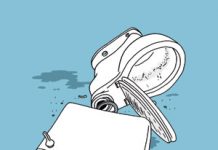 Messes of My Own Making