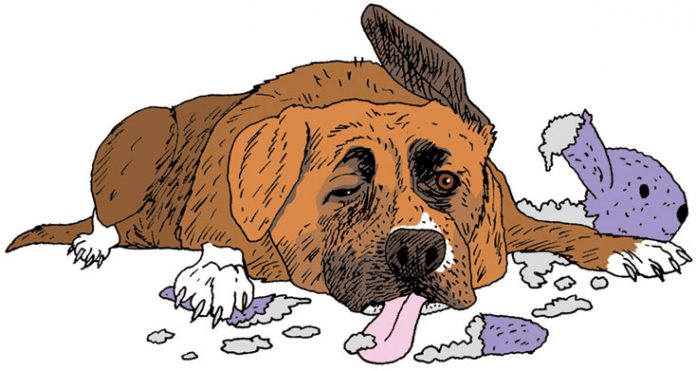 I’m fond of telling people that my friend Lary has taxidermied bums in his basement, but that is an exaggeration. There is just the one taxidermied cat, and it isn’t so much taxidermied as simply mummified—and even that is not a proven fact, but I don’t see how the case could be otherwise. Lary’s beloved old cat disappeared nine years ago, so it’s somewhere in the dilapidated abandoned candy factory that Lary calls home, most likely in the basement, trapped under something heavy, mummified.

Nine years is a pet record for Lary, but still he won’t get a dog, because where cats are agile and able to avoid tumbling scaffolding, a poor dog wouldn’t last a day in his place, otherwise known (to me) as Lary’s House of Spinning Razors and Fame. After ten minutes the poor beast would probably become embedded with the rusty contents of an entire toolbox. This is why Lary doesn’t have a dog.

I, on the other hand, surprisingly do. Six years ago my friend Michael brought a latte-colored Dumpster pup to my house and declared it my foster pet, which meant I got to keep it permanently. She is equal parts pit bull, Labrador, boxer, and crocodile, with a janky ear that sticks straight up from her head. She was a devoted and sweet puppy but oddly unable to cuddle. If you tried, her legs would suddenly jut straight out like spikes on a potato, and the look on her face would exude wild confusion: “What’s this? What is she doing?” I had to wait until she was asleep to cover her with kisses and hugs.

Michael brought her to us because we were a mother and daughter living alone near Downtown Atlanta. “She’ll protect you,” he said, and he was right. Today this dog would throw herself in front of a pack of rabid badgers to protect me and my girl, who named her Sockie because all of her feet are white, as is a heart-shaped patch on her chest where, coincidentally, her big heart is. Sockie was named back when Mae was still naming things like a child—like she named our cat Midnight Moon because of her white face and our other cat Rose Petal because the tortoiseshell pattern of her fur looked like flower petals. Both of those pets died too soon, and now their replacements have normal names like Sgt. Pepper. So Sockie is the only pet left who was named by a kid.

Coincidentally, Sockie also liked to eat socks. Then her tastes graduated to stuffed animals. We’d come home to find the den covered in fiberfill, and we’d cram it back into the empty skin and toss the victim into Sockie’s toy box. Mae made sure to keep her favorite stuffed animals out of the dog’s reach, but those were getting fewer, seeing as how she just turned thirteen and hardly trifles with toys anymore—or with me, for that matter. I have to wait until she is asleep before covering her with kisses and hugs.

Then one night Sockie flopped on her side and lay there suspiciously long, and crying, too—also suspicious. Her nose felt cold and she wouldn’t eat, not even the canned cocktail wieners from Aldi, which are her favorites. On the advice of a Facebook friend, I went into the backyard and poked around in all of Sockie’s poo piles until I found a purple ear from my daughter’s latest Easter bunny. It looked like Sockie had finally eaten the stuffing out of an animal that was her match.

I don’t have a high tolerance for anuses of any kind, but there turned out to be tons of disgusting remedies on the Internet for this particular dog malady, and I methodically employed them all until something finally worked (canned pumpkin played a major role). I did this without a second thought. Dogs are so certain we’re gods that it’s heartbreaking not to try to deserve the love they give. No matter how short I fell on this scale, this dog was devoted to me and mine. She had viciously chased scores of people from our front door, a few of whom were actually unwelcome. The least I could do was push up my sleeves and don some rubber gloves.

The process required goggles and a post-trauma hose down, but finally Sockie got back to about 85 percent of her normal hyper self, and a full recovery was near. I stripped off my hazmat suit and sank into my couch. Soon I felt something unfamiliar pressing against me. I opened my eyes with a start to see Sockie sort of crawling—onto my lap.

“What’s this? What is she doing?” I panicked.