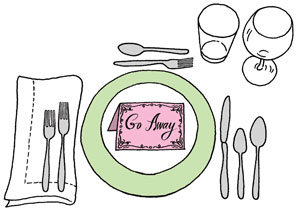 It’s part of the writer’s profession to endure public flagellation and mortification fairly regularly. One time I was asked to present at a book festival in North Carolina, only to arrive and find I’d been typoed off the agenda, so the only audience members at my book signing were two prisoners on day pass from the local penitentiary.

Another time I was begged—begged, I tell you—to be the “celebrity” auctioneer at a college alumni fundraiser. Then they fired me in the middle of it all—while auctioning off “any injectable procedure” from a Buckhead plastic surgery practice—just for razzing one of the audience members for his incessant habit of high-fiving people. During charity auctions, where a raised hand is considered a bid, such gestures are volcanically irritating.

“Sold! One injectable procedure to the drunk in the red cummerbund,” I called. “You’ll only feel a tiny little prick. I’m sure that’s nothing new to you.”

The drunk did not laugh, even though it was pretty funny if you ask me. What he did do was stumble sternly to the twenty-six-year-old event manager, and the next thing I knew she was asking me to hand over the microphone. I mean, c’mon, if this is how she wanted to thank me for showing up for free—fuh-REE—to auction Botox and beer signs while pretending to raise money for kids with cancer, then at the very least she should expect me to turn the experience into material. Anyway, I’ll rise above and not mention the alumni fund by name, except to say it starts with a “P” and ends with “enn State.”

But the best of all of my writer mortification stories was when I was invited to write a personal essay on my experience as a guest at the supper party of a celebrated chef. I’d been to the chef’s restaurant before, where my meal consisted of four Chiclet-sized pieces of cheese served on a plate the size of a satellite, while the server told me the reason the cheese was so expensive was because it was aged in Swiss bank vaults surrounded by diamonds or something.

Still, the editor made it sound like a fun assignment, and I agreed to let her set up the invitation. “One popular personality writing about another!” my editor bubbled. She even bandied around the phrase “bon vivant.”

But when the day came and I arrived at this chef’s home, she welcomed me like I was late for work, eyed me like a parole officer, and wouldn’t talk to me above monosyllables. She must have instructed her other guests to treat me the same, because I couldn’t have pulled a decent sentence out of them if I’d used the suction power of an airplane toilet. At one point the chef brandished a tray of exactly enough Champagne cocktails for everyone in her party but me. Even the guest who was seven months pregnant got one.

Then supper was ready, and we eagerly milled around the gorgeously appointed farmhouse table in the kitchen to find our seats, which were indicated by dainty place cards. Soon only one seat remained, and since the chef was still stirring her cauldron at the stove, I was actually startled to think she had declined to set a place for herself. Because never would my head have made the leap—even as I made my way to the last seat and up until I saw the chef’s own name on the place card—that she wouldn’t set a place for me at the table.

When the realization hit me I simply died discreetly and walked right out the door and onto the lawn. I called my editor to tell her I couldn’t possibly extol this chef’s entertaining skills when she made me feel as welcome as a farting hobo. My editor begged me not to get her in trouble by upsetting the chef. I reluctantly returned to see that, of course, my absence had not been noticed. I made a seat for myself by dragging a stool from another room to a far corner in the kitchen, where I sat furiously scribbling notes to my editor, like “You owe me huge for this!” and “I’m a bon vivant, dammit.”

When they finished eating and the cold heap of the meal lay picked over like a literal carcass, the chef got up to retrieve a paper plate for me “in case I wanted anything.” As the party retired to the patio for sunset drinks, I begrudgingly spooned two minuscule dollops of the grotty leftovers onto my paper plate and had a taste.

And this is the part that still to this day enrages me the most. Because—wouldn’t you know—it was delicious.