Home Uncategorized In My Own Defense 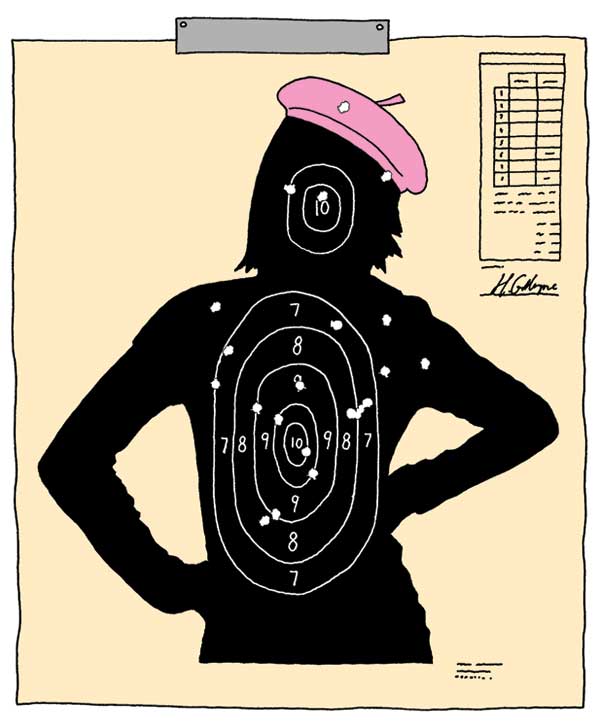 Evidently I was dressed wrong for a shooting. But then that is why I was there, because Michael had made it apparent that I know nothing about guns.

“What’s with the beret?” he laughed.

I thought berets and guns went well together. Patty Hearst wore one in the iconic photo of her robbing the bank, Che Guevara wore one on that iconic T-shirt of him looking all iconic, and Faye Dunaway wore one in Bonnie and Clyde.

“It’s not just the beret,” Michael said, indicating, like, my shoes, a pair of perfectly good peep-toe ballet flats. “Too dainty. You should wear something more rugged at a shooting range.”

Really? Because recently, when I started freaking out about being attacked, I always thought that if the occasion came when I had to shoot someone in self-defense, I’d be wearing stuff I normally wear, minus the beret. People don’t get attacked in their sleep while wearing combat boots and motorcycle jackets, even though that’s exactly what Michael wears every minute of every day—which, come to think of it, is probably the reason people never attack Michael. Plus, he is six foot seven and he owns eight guns.

But I’m not Michael and I doubt I’ll ever own a gun, so I was wearing exactly what I would probably be wearing (minus the beret) if anyone ever attacked me, the odds of which, according to statistics, are dismally high. Right now as I write this, there are news reports of a sexual predator attacking women in their sleep in Buckhead. So my goal is not to get my own gun, but to know what to do with the gun once I disarm my assailant, see?

A few days earlier we were sitting in the Vortex in Midtown when Michael whipped out his own revolver, opened the cylinder, and unloaded all the bullets right there on the bar. We probably would have been arrested if not for the fact that Michael actually owns the place. He demonstrated how all the barrels were empty and aimed the gun at the bottles behind the bar and clicked the trigger. After giving me his “always treat a gun with respect; never aim it at a person you don’t intend to shoot, even if it’s not loaded” spiel, he said, “Go ahead. You try.”

Later at the shooting range, almost all of the 5 billion bullets I fired went in the general direction of the target. Michael wanted me to demonstrate how I’d disarm my assailant in the event of an attack. “Pretend I’m the thug,” he said, brandishing a fake gun. So I demonstrated the technique I learned on YouTube, which involves a lightning-fast grab-and-jab, followed up by some heavy swatting. The gun did not exactly end up in my hands, but it certainly ended up out of his. “I’ll need to hold on tighter,” he said, and it made me wonder if you can take the measure of a person by what they choose to hold on to tightly.

My fear of being attacked commenced with the installation of cable in my home. One of my new favorite programs is Snapped on Oxygen, which almost invariably details a real-life wife’s unsuccessful attempt to get away with having made her husband real dead. Watching this, I’m stupefied. How could she do this to the father of her kids? And for what? Money? Is that really what’s worth holding on to tightly? I was reminded of news footage I’d seen as a girl, which detailed the 1980 fire at the MGM Grand in Las Vegas. Eighty-five people died, many of whom could have lived if they hadn’t gone back to their rooms to collect their bags. A mass of them were found in an elevator bay, still clutching the luggage they’d refused to let go of, having wasted precious time packing before attempting their escape.

So really, over time, it occurred to me that it matters—what we choose to hold on to and what we let go. I don’t want to hold on to my own gun; I want other people, the people who snap, I want them to let go of theirs. At the range I kept shooting at the target silhouettes, even when the bullets were spent, because I liked the sound of the click. Click. Click.

“I think something snapped in you,” Michael said.

No, something clicked in me. There’s a difference. 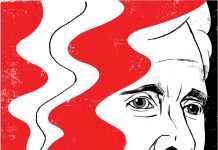 Tex and Diane McIver had it all. Now she’s dead, and he’s going on trial for his life. 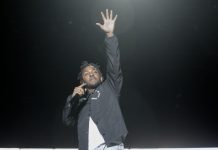 Atlanta Must Reads for the Week: The Second Amendment workplace, remembering Bankroll Fresh, and the future of Black Lives Matter