Home Uncategorized Life in a Flash 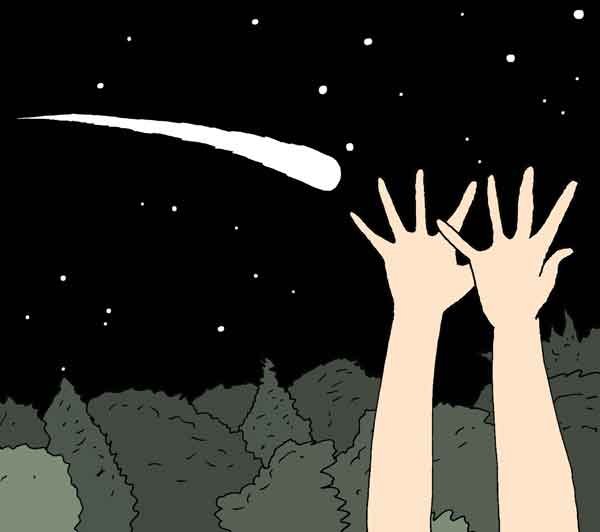 It’s rare when I catch something. I am customarily the butt of jokes due to the fact that things tend to sail over my head. I can’t count the number of insults I’ve weathered very amiably simply because I had no idea I should have been offended. I remember once when a prostitute in my former West Atlanta neighborhood threatened to kick my “skinny ass” for traversing the block and shooing away all of her customers. “Really? You think my ass is skinny?” I responded excitedly. I totally missed that she was mad at me.
Lately that is my big complaint. I keep missing things. Take my daughter. Somehow she turned into a young lady, and I feel like I totally missed it. I mean, there must have been a moment where all of a sudden it happened, right? When she went from being a child to a beautiful young girl? Did it literally happen overnight, while I was sleeping? Did she go to bed one way and wake up the other? I don’t know. I missed it. It’s as if I were distracted and turned away, only to look back and boom! the transformation had occurred—the long limbs, the glowing smile, the impossibly large eyes always rolling at me for missing something. “Did you not catch that?” she’d ask. No, I’d answer. I did not catch that.
I wasn’t always like this. When I was a kid, I was really good at catching stuff. In fact, my favorite kickball position was in the outfield, where the athletic boys would send the balls flying and where I seemed to fly myself, catching them. I was way better at catching the balls than kicking them. Then I grew up, and the occasions to catch or kick balls became a lot less frequent. These days I watch my daughter play baseball. She is taller than most of the boys on her team, and I must say she is pretty good at catching things that are thrown at her.
Once, one of her teammates hit a foul ball that flew near me, and I watched it sail by. One of the other mothers caught it and tossed it back onto the diamond. I wondered why I didn’t put my hand out, except to say that I was not catching things lately. That explained it well enough at the time, and I remember wondering when it would come back, my ability in that regard.
Then my daughter celebrated her graduation from elementary school, and I didn’t think it would be that emotional for me. I thought I was past all the blubbering and the sentiment. Because the day came all of a sudden when I went from a new mother to an old hat of a mother. It must have happened overnight. One night I went to bed all nervous and unsure of my parenting skills, and the next morning I woke up experienced and faithful of my abilities. So here my daughter is graduating from the fifth grade, and she’s walking down the aisle of the auditorium in an actual procession, and she’s wearing a grown-up dress and shoes that could almost fit my own feet, and my breath caught in my throat. Not because she looked so grown-up, but because right then I could see through all that to the child in her—my child—and I realized I would always be able to. Thank God.
Later there was a party at a giant community garden in Candler Park, where candlelight illuminated the children as they frolicked through the trees and flowers. I watched my girl as she behaved as youthful as she should have. Dancing here, kicking and catching balls there. I kept telling her it was late and we should get going, but she begged me to let her stay. So I sat with my back to the fire, looking at the night sky, when suddenly a meteor shot across the horizon. It was the most incandescently spectacular thing I’ve ever seen. It was a fireball, really, blazing a white trail and exploding in a green and blue flash, and then it was gone. My daughter came running to me, breathless. “Did you see that?” she squealed. “That was awesome! Tell me you caught that!”
Yes, I said. I caught that.
She hugged me very tight for a while, but in the end there were still balls to be caught or kicked, and in a flash she was gone.
Illustration by Peter Arkle
Advertisement 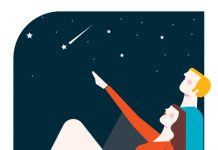 Stargazing in Atlanta: Your guide to the summer sky 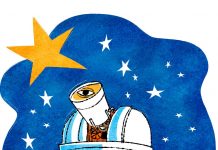 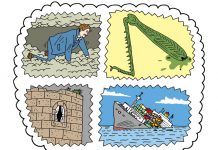