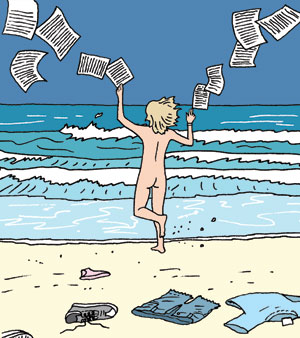 I’m an average adult, which means I’ve seen enough pornography in my life not to be freaked out by naked people, but still, when you unexpectedly encounter naked people in an unexpected place, like all out in the open—in nature—it freaks you out.

And even though they were all out in the open, my mind did not register anything about them except their nakedness, because it’s absolutely possible (I swear) to catch a glimpse of a naked person without seeing any specific parts. Especially if it registers immediately that, “Oh my God! That’s a naked person with another person over there on a chaise lounge by the creek all out in the open !” and you immediately about-face your ass to try to walk casually back to your car so as not to alert them with frantic scrambling.

And to their credit, they weren’t exactly all that “all out in the open.” Not really. There were trees and bushes and shrubs and flowers and a fence and a sign that said “Private Property,” and another one that said “No Trespassing”—but other than that it was pretty much out in the open.

So admittedly, it was me who should not have been there rather than they who should not have been naked. But in my defense they were kind of my neighbors at the time. I needed to escape Atlanta to pound out pages for a book I have due, so I holed myself up in a cabin in the woods outside Dahlonega. But then I literally needed to borrow some sugar (okay, matches), and the neighboring property looked really inviting after I knocked on the door and could tell people were home. All the lights were on and the cars in the driveway and Marvin Gaye on the soundtrack. (It’s possible that Marvin Gaye is purely part of my own personal soundtrack when I play the scene back in my mind.) So naturally I started roaming around hoping to find them, assuming that when I did they wouldn’t be naked. But I was wrong.

As I scampered away I realized I wasn’t feeling all the shock I thought I would. Instead I tried to recollect a time when I was ever naked all out in the open like that. I’m a writer, for chrissakes, I’ve had experiences. What about that summer when I hauled an actual plug-in portable typewriter to the Greek island of Corfu, thinking I was going to write the next great epic romance? Or at least one that was comparable to the truckload of my mother’s that littered the homes of my childhood. I remember thinking that if my mother just pushed the pages aside once in a while she might find some romance of her own, but as far as I could see she remained romance-free until the day she died. I went to Europe during college partly because I didn’t want to end up the same way. So surely I’ve had a few experiences involving nudity and the outdoors.

But I couldn’t think of any. That one time on the beach in San Diego with an Italian soccer player didn’t count because we were not all-the-way naked. Then he asked me to travel with him back to Sicily, but I declined because I had pages to write, and it was always my dream to publish a book. In fact I had always been really out in the open about that dream. Even today, when people ask me to tell them about the moment I realized I was a writer, I always respond that there was never a moment when I was not one. But oddly, no matter how much time I spent partially clothed on beaches with Italian soccer players, I could not write a love scene that rang more genuine than a badly acted infomercial.

That was almost two decades ago, and I’ve hardly thought about it since. Then I happened upon the two naked people in their private outdoors. Once I was a safe distance away, I tried to let out a wry laugh, but it caught in my throat and I had to clap my hand over my mouth instead. Because at that moment, astoundingly, I realized I had never in my life really braved nature and the wide-open sky and the awkward intrusion of a stranger to smile into the eyes of a lover all out in the open—and it suddenly occurred to me that I wish I had not always been a writer. I wish I had pushed the pages aside once in a while.