Home Uncategorized No Turning Back 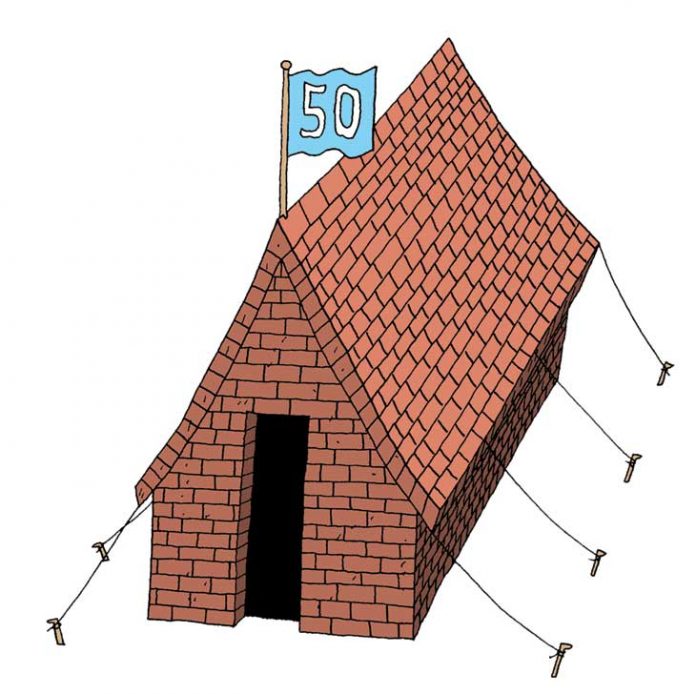 I just turned fifty. There. I said it. It’s not so bad, really. There are a lot of things I don’t do anymore, but it’s not like I miss those things. Like I no longer pass out in parking lots. I’m relieved to be beyond that period in my life. I remember one night, years ago, I was at the famous Atlanta strip club Clermont Lounge with Grant Henry and Daniel Troppy—both now respectable local businessmen, if you look at them through heavily squinted eyes—and after a drunken revelry into the wee hours, they left me there, passed out in the parking lot. I survived to berate them about it in a subsequent column, which brings me to another hard-earned element of over-fifty wisdom: Don’t write about passing out in a parking lot unless you’re prepared for your readers to go there to this day and expect to find you. I still get emails from people standing behind the Clermont, imploring, “Where are you?” To those people I say, “I’m fifty. I’m tired. Leave me alone.”

Then there’s camping. Until last year, my twelve-year-old daughter often went camping in the Georgia mountains. Then the family who took her moved away. Now she wants me to take her, but I’m fifty, you see. I don’t do tents.

“You used to,” she protests, and she’s right. In my twenties, I dated a Welsh soccer player who loved to camp, and I loved to pretend I loved it too. But that relationship ended, and so did my idiotic belief that I could base anything lasting on a pretense. But today, framed on my desk, I still keep a picture of me in a campground outside Lyon in France. Behind me is a field of mustard flowers—a blanket of gold against the sunset—and I am standing with my arms out, as if to say, “Ta-da! Look at me.” There is a bottle of wine in my right hand. I am twenty-five years old. It is exactly half my life ago.

I guess if I were to pick a midpoint in my existence, this would be a good one. I’d ridden my bike there from Zurich with one of the loves of my life (maybe the third out of five or six, but don’t quote me; I’m fifty and entitled to lose count). I liked to cycle and he liked to camp. I kept one other picture from that excursion: a cluster of albino cows in a pasture, the morning fog still clinging to the grass at their hooves like a little layer of smoke. To me they looked like a small host of bovine angels.

Last summer I took my girl to Tunisia. We didn’t stay in a tent—we stayed in a room with a balcony—but I remember there was a dead cat in the gutter in front of the market across the street. Every time my daughter brings up camping, I remind her of the dead cat, because encountering dead cats is about the worst hardship I’m willing to endure when I travel these days. She reminds me that the cat was not even dead, it was just extremely tired in the intensely hot weather. I tell her I’m still not ever sleeping in a tent again.

“You won’t even try,” she pouts, which cracks me up. I did try, long ago, over and over again. It didn’t work out. I admit there were moments, like the pasture of yellow mustard flowers, and how one morning we woke up to the soft singing of a four-year-old French child from a couple of campsites over. But I like walls now. Real walls. Without them you’re just sleeping on a patch of land with a bunch of strangers. The beauty of being fifty is the relief that comes with the conviction to stop sleeping with strangers. My friend Grant hates that I have this conviction. He still wants me to use that wild week camping with the Welsh soccer player as a standard for my behavior to this day. But seriously. I just want to lie down. By myself. I want my space. I want my walls.

Still, I do keep the picture, the one of me at a campsite in France, framed on my desk. I don’t know why, except to say that sometimes—not often—I think maybe I could go back to that place and expect to find everything still there: the field of mustard flowers glowing in the sunset, the four-year-old child singing softly, the bovine angels lying languidly in the early morning mist. Sometimes I expect to find myself still there too, young with no walls, standing against the golden pasture with my arms out. There is a bottle of wine in my right hand. “Ta-da!” I’m saying. “Look at me.” 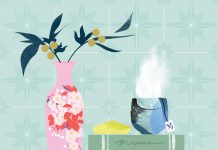 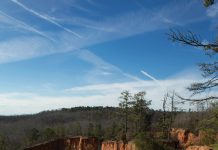 See every shade of Georgia clay at Providence Canyon 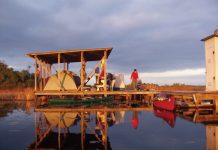 5 remarkable Southern sites to sleep beneath the stars