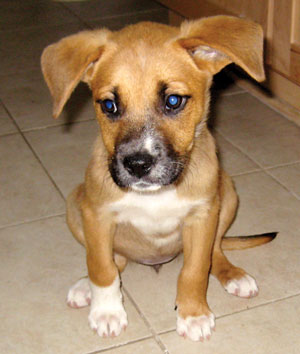 I thought I was past the point in my life when foolish decisions would put me in danger of waking up in puddles of unfamiliar urine, but I’m told this is what I get for sleeping with strangers. I could argue that in this case I seriously did not know what else to do, but the argument would be feeble since I know for certain what I should have done. I should have said no.

In my defense, though, I don’t remember actually being asked. What I remember is the e-mail from my friend Michael with the picture of the mutt puppy he found wandering the streets, and thinking the puppy had very odd ears—big ears that stuck straight out from her head and then folded down at the tips, like the hat on the Flying Nun. She had short, wiry, latte-colored hair with some white patches and a black muzzle, obviously a mutt born of two mutts from a long lineage of muttigree. There was nothing obviously spectacular about this puppy other than her puppiness—because puppies don’t even need to be cute to be cute—and the fact that, and I swear this is true, she has a spot on her belly in the shape of a perfect heart.

Even so, this is not the puppy I would have chosen if I’d ever gotten around to choosing one like I’ve been kind of quasi-planning to for the past couple of years, ever since my last dog died. Her name was Cookie and she was a purebred pit bull. I picked her because she was the runt of the litter and had a deformed tail that looked like a carrot that grew through a crack in the sidewalk. She was nursing on her mother with her brothers and sisters when I lifted her up to get a better look, at which point, as though on cue, she urinated down my chest.

Some people would consider this a cautionary sign, but not me. I took one look into her caramel-colored eyes and the crust around my heart cracked like bad asphalt. I took her home and she grew to be the most lovably excitable nuisance I’d ever alternately wanted to kill and cover with kisses. I lived in a bad Atlanta neighborhood at the time, with a drug-dealer neighbor, crack whores on the corner, and a never-identified severed human head in a plastic sack that police had recently found up the street. So there was a reason I picked a pit bull as a pet.

And Cookie was a very effective deterrent to criminal trespass at my particular address, even though she was small for her breed and had a countenance about as menacing as a birthday balloon. Even so, I never had a problem with any of the miscreants who swarmed my neighborhood like hornets, and I like to think it was because of Cookie—that and the bullet-hole-riddled target silhouettes taped up in my windows.

But I can be honest now and confess that the only way Cookie could have fended off an actual burglar would have been if he was deathly allergic to dog slobber. She would have tackled him, yes, and chewed on his head, yes, and peed and drooled all over him, but this is how she treated all my houseguests. This was her way of showing love, and if there is anything to be said about Cookie, it is that she was full of love . . . and excitement . . . and joy . . . and urine . . . and, apparently, the inability to contain any of it.

It still pains me to talk about how she died, so I will tell you this: It was before her time, and it involved illness and a trusted vet who advised us that her pain would continue unless we put her out of it. I can still see her face so clearly the last time I looked into it, her kind, dark eyes almost black with pupils widened in agony, yet her carrot-stub of a tail still wagging anemically to greet me. That is the most unbearable part to recall of that day: her dear, wagging stump of a tail.

I thought I would eventually choose another dog, but I never did. Then my friend Michael brought this one over, and I thought it would be just for a visit. She is the same color as Cookie, but where Cookie was excitable, this one is as mellow as a monk. I named her Sockie.

“Here’s her medicine,” Mike was saying, “and the form to register for the microchip.” I was about to protest, but then I picked her up to get a closer look at the heart on her belly and, as though on cue, she urinated down my chest.