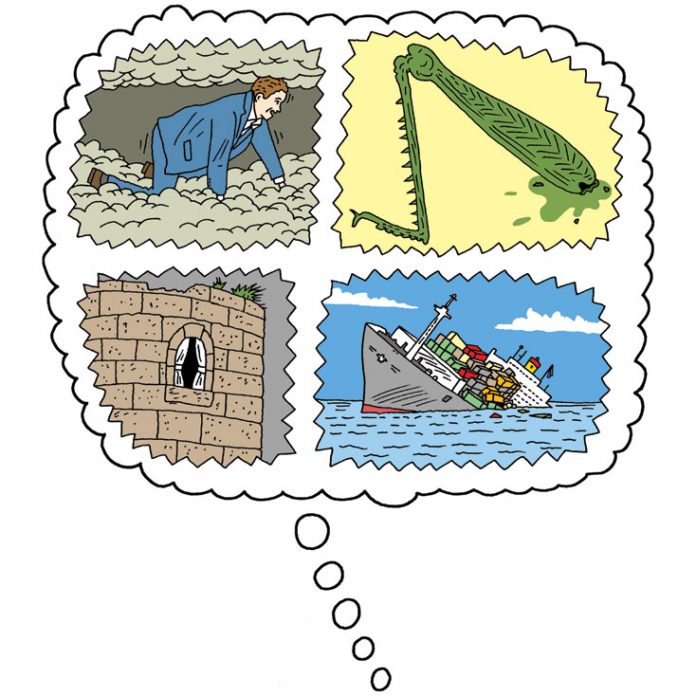 My life keeps flashing before my eyes, which is funny because as far as I know, I’m not dying. The most I’ve done is turn fifty, which some may consider the same thing. But I would think I had a hold on things, if not for the flashing. Like I keep thinking of a training video from when I was a flight attendant based in Atlanta, shown after a then recent plane wreck had debunked the practice of keeping your head all the way down during the evacuation of a flaming fuselage. “Passengers should crawl out while keeping their heads at armrest level,” the instructor said, “because that is where the air is most clear. If your head is too high, you’ll inhale smoke; too low, the noxious fumes.”

You’d think it’d be the highlights, like the time I received the offer on my first book or the time I was invited to be on The Tonight Show with Jay Leno or the birth of my child—though truthfully I included that last one out of pressure. The day my child was born was messy and miserable. Actual gore was involved. It wasn’t until the day after that the awesomeness of the situation began to emerge. But this is not what flashes before my eyes.

Instead it’s the time when I waited tables during my junior year in college and I comforted a sous chef named Dimitri after he accidentally chopped off a grasshopper’s leg. The bug had somehow emerged on the rim of the big plastic garbage bin in the back of the kitchen, and Dimitri had jokingly swatted at it with a butcher knife, not meaning to hit it. But he did. The grasshopper didn’t scream or cry or complain or seem to suffer, really. It simply struggled to continue, walking all wonky atop the orange peels and other kitchen detritus. Dimitri’s face fell like a ruined soufflé. He gently picked up the injured insect, set it free out the back door, then sat on the big meat scale by the walk-in freezer and cried. Why does that scene—that exact scene, when I stood patting Dimitri’s shoulder—why does that keep flashing before my eyes? Why not, like, the last time I saw my father’s face? Or the day I learned to drive? Or when I shook the hand, which was missing one finger, of the woman who foolishly gave me my first job at an ice cream parlor (which promptly cost her 3 percent profit that month due to my heavy sampling of all the inventory)?

Then there was the time I had a layover in Frankfurt. It was one of many; hundreds, probably. But on this occasion, I walked along the river with another flight attendant who had hair the color of soft copper. The weather was cold and cloudy and I don’t remember a single word of what we talked about. What I remember is that we walked across an ancient railroad bridge that traversed the entire Rhine and at the other side there was a circular stone turret that must have been built when Beowulf was written, but still there were tidy little lace curtains in the lighted windows. It occurred to me then that, wow, someone lives in there. I don’t even remember the name of my companion that day, but I remember that the gray sky looked like it was about to boil, and that I wished I’d worn gloves. And my friend’s hair as she walked before me down the steps of the bridge, how it reminded me of a warm torch against the grayness of the day.

See? It was not even a brilliant day, but a gray one, the color of putty. These minor scenes and a few others like them, these pester me—random scenes, arbitrarily plucked from my past, containing people I barely knew, yet replaying like late-night infomercials, aching in an odd beauty. Is this normal? I don’t remember being plagued like this before, or if I was, it was with memories that mattered—big, impactful moments, important moments, right? Like when my agent introduced me to Al Pacino, or when . . . Christ, there’s a million of them, but I can’t recall them just now. I’m too busy thinking of that time my friends and I discovered a wrecked cargo vessel off the coast of Mexico, and I tore half the skin off my legs shimmying up the steel cables to climb aboard. These are not the highlights of my life; they are not even the lowlights—they are the in-between. I don’t know why they emerge. I really don’t. And I don’t know why people fight aging so furiously, because seriously, what is the alternative? So I don’t fight. I don’t even worry. I just have the flashes. Maybe they are simply where the air seems to be most clear these days. Maybe it’s where, as I crawl through the flames, I seem to breathe more safely. 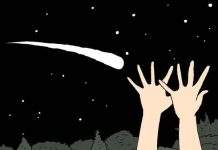 Life in a Flash