Home Uncategorized Swoop, There She Is 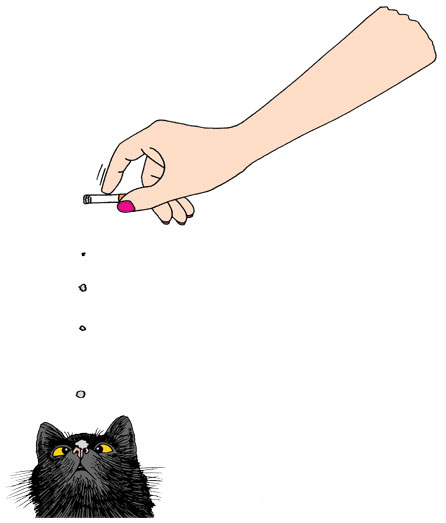 My cats smell like tobacco again, which can only mean one thing: My sister Cheryl has come to visit. Only to her, “a visit” entails an actual address change, like she is receiving mail at my place now, and receiving incoming calls on my cell phone, and she has commandeered my car as well. She has even—I am not making this up—taken over my actual shoes. In fact, I am considering moving out of my house until she is finished taking it over. I fantasize about having a small, private place to myself—which used to be what I had in my house—with air that isn’t heavy with the smoke from a dozen packs of Pall Malls. But I am only alone for a few minutes until I hear the familiar sound of fingers fumbling for a lighter, because Cheryl can’t sleep if anyone else in the house is awake.

Not that Cheryl smokes in my house. In fact, her many cigarette breaks throughout the day are my only reprieve from her company. She smokes on my front stoop and mistakes my mailbox for her ashtray, and then she comes inside to kiss my cats because she misses the ones she left behind in Nicaragua, where she supposedly lives. I have never seen her actual home, since she refers to it as “the bodega,” which translates to “the garage,” so I just take her word for it, and when I visit I stay at a hotel near the bar she owns with her husband in Granada. That’s fine with me. I love hotels.

Cheryl, evidently, does not. She loves houses. She came here to Atlanta to buy another one, seeing as how banks are now unloading foreclosed properties like flotsam off an overcrowded helicopter. So far the endeavor has taken four months. Four months’ worth of her always there in my house. And the thing about Cheryl is that she operates at a constant excitement level that, for the rest of us, can be reached only by winning a Winnebago on The Price Is Right. Cheryl, on the other hand, will get that excited—jumping around and hugging strangers—when the movie theater has fresh popcorn, or when the drugstore carries her preferred brand of peanut clusters. So there is not just another person in my house, but a constantly excited person who is always jumping around and hugging everyone.

I used to attribute this behavior to her penchant for booze, because once, during a prior visit, she prepared for me her famous strawberry-banana breakfast smoothie with the secret ingredient, which turned out to be Bacardi 151. But it’s not the alcohol, because like lots of boozers who become bar owners, she hardly drinks at all anymore.

So I love my sister, I really do. And I want to throw her out, I really do. But I don’t because, for one, as a grade-schooler she was the best four-square player on the blacktop. She could smash a ball into the pavement like it was a boulder pushed out of a passing airplane, and she could smash heads that way, too. It was best not to play against her, so I used to be her partner instead, but really all I did was keep the game going until the perfect moment when she would swoop in to finish up and take all the credit.

So I look back on how Cheryl could smash that ball, and I think maybe her always being there won’t be a bad thing when I get to look back on it. Like I look back on the time, years ago, when our mother was sick in San Diego. We were young and scattered, both literally and figuratively. I’d already moved to Atlanta, so the only person who was always there was Cheryl. On the day our mother died, I had flown in just hours before. Cheryl answered the door and, without a jump or a hug, immediately locked herself in the back room of the house and wouldn’t emerge until I knocked on the door to tell her it was over. And I guess that is how it works. One sister does what she can until the other swoops in to finish up and take all the credit. So my sister does drive me crazy. She does. But she is my sister, and unlike most people, she is always there.