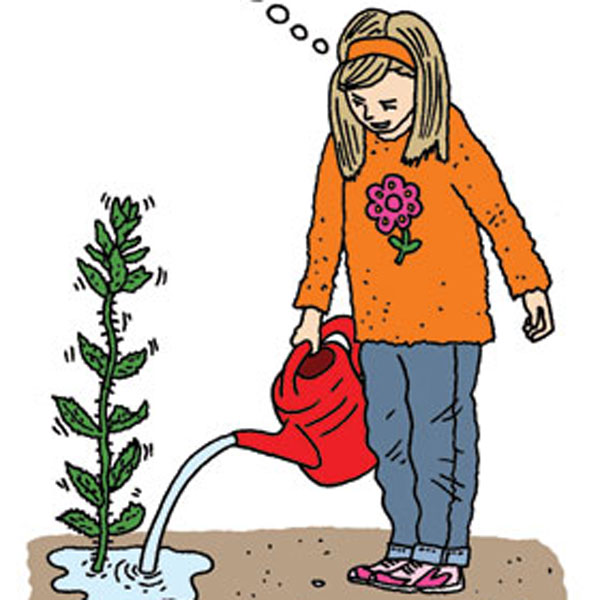 Some say a weed can’t grow into a tree, but there is a weed growing out from under my neighbor Robert’s house with a trunk the size of my thigh. He should have cut the weed when it was small, but when it comes to his lawn, Robert doesn’t cut much. His yard is so untamed it actually swallows things.

But my girl, for one, likes growth and vegetation. Last year when she was eight, she took a seed from the apple she was eating and planted it in our front yard. Soon after, a green weed grew up in almost the same spot, and she took to believing that was her very tree sprouting. I didn’t tell her it was a weed and let her believe what she believed. I figured she’d lose interest soon enough. I should have known better, because that’s all kids are is interest.

I live on an active intown Atlanta street, with a cement plant five doors down. My front yard is small, consisting of barely two patches divided by a path from the front door to the sidewalk. It’s hard to maneuver a lawn mower in such a confined spot, so, in short, Mae’s weed got mowed. Mae came home from school that day and immediately burst into tears. I didn’t know why she was upset. “My tree! My tree!” she cried, and it suddenly dawned on me that I had accidentally chopped down Mae’s tree.

“The top just got cut off,” I clamored. “The bottom is still there; it will sprout back up soon enough.” A few days later I found another weed and plunked it into the ground where the other had stood. When Mae discovered the new sprout, she surrounded it with stakes and yellow hazard tape, with a sign that read, “Please don’t chop the apple tree.”

Over the ensuing days, she watered that weed and tended to it like an incubated baby, and I began to feel bad because it was just a weed—and not even a rooted weed at that, but a weed just plunked in for appearances. So as the weeks went on and she didn’t lose interest, I began a process that involved the plunking of larger weeds in place of previous weeds so as to emulate the actual growth of an actual tree. I wouldn’t say it was an exhausting process, but it was a very involved one. Each progression involved trespassing in my neighbor’s yard, because his weeds are much heartier than mine. In fact, that weed growing up the side of his house reaches five feet above the roof.

Anyway, each time I swapped out one weed for another, I had to inspect it to make sure it was of the same variety as the former, because by now Mae had turned nine and I worried she was becoming less susceptible to subterfuge. On the contrary, though, she was so encouraged with the growth of her apple seed she decided to plant a garden, with peppers, tomatoes, strawberries, and stalks—actual stalks—of corn. I had no idea if the hardened soil in my measly front yard could support a vegetable garden, but my daughter had no doubt. We created a garden bed by standing old bookshelves on their sides and staking them into place with eighteen spare eggbeaters from Value Village. Today we have stalks—actual stalks—of corn in there. They are as high as an elephant’s eye (or that of a baby elephant, anyway). The tomato vines are even taller.

Then one day my neighbor Robert stopped by to comment on our garden, and I filled him in on Mae’s “apple tree” and how I had been grabbing weeds from his yard to stand in for the stages of a budding sapling. “Maybe one of them will take root and turn into a tree like yours did on the side of your house.”

“That weed?” he laughed, pointing at it. “Turns out it’s a pecan tree!”

Wow, a pecan tree. I had no idea they could just grow out from under your house like that. But then I had no idea my own patchy front yard could sustain a lush little vegetable garden, either. In fact, if not for my girl, the yard would be as barren as a desert bed, I’m sure. But as the saying goes, “We have children so we can believe everything all over again.” So it turns out a weed can become a tree after all. Today, there is an actual apple sapling in our front yard, with blossoms and everything. My daughter has no doubt whatsoever that it grew from a seed she planted, and neither do I.