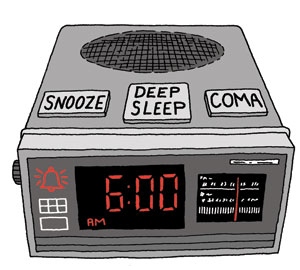 And the snooze button silences the alarm for nine minutes.

All I know is that when the alarm goes off, I estimate I have eleven more minutes until it’s 6 a.m. So when I press the snooze button, I will have nine more minutes of sleep, more or less, after which the clock will say it’s 6:09, probably, when in actuality it will not even be 6 a.m., right?

And so on, until each morning, after I’ve spent all this time figuring how much time I have left, it’ll occur to me that all this figuring has brought me wide awake, so I might as well get up. This is why I never know what time it is in my bedroom, because I’m convinced if I knew the real time in there I would never get out of bed.

This is probably due to the Swiss clock I remember my mother kept on her nightstand, which itself was in Switzerland, which is where I lived with her for two years. Of course, there were other years I’d spent living with my mother, much earlier years, but during those she didn’t seem to have a snooze button addiction. It wasn’t until I grew up and moved out, then back in again, that my mother’s affliction became apparent.

“Mom, wake up!” I’d have to yell through her door. Sometimes I would even enter her room, take her by the arm, and pull her out of the bed onto the floor.

I remember she suggested I move to Zurich with her because she’d just been contracted to work there through the weapons design firm where she was employed. I was freshly graduated and had just procured a perfectly respectable job as a part-time receptionist for a real estate brokerage. It was every bit as enriching and creative as spending my day tearing the flesh off my face, and paid almost as much, too. So it fell to me to make a choice between this existence and moving to one of the richest countries in the world with my mother.

“Hell, yes, I’ll bag my crappy job and move to Switzerland with you!” I hollered, glad she had called me at work, because that outburst could serve as my notice as far as I was concerned. I left that day and never went back. I was twenty-five. I was still certain the world was my personal balloon on a string, and no alarms were going off to tell me I needed to grow up.

That didn’t happen until I got there, when my mother kept not waking up. At first it was just annoying, how every morning she played patty-cake with the snooze button until the morning was almost gone. At first my simple pounding on the door was effective, but then the yelling was required, and then the pulling and the pleading became necessary, too.

“Please get up. What’s wrong with you?” I implored.

My mother was usually good at getting up. Getting up was her specialty. For example, way back when it became evident she’d married a boozing, jobless gadabout, she immediately got herself hired as a programmer at IBM. Never mind that it was 1954. Never mind that she was pregnant with my older brother. An alarm went off in her head, and she picked herself up and pulled herself through.

“PLEASE GET UP!” I’d be hollering at her decades later.

Eventually she admitted herself into a clinic. Afterward, she got up easily in the mornings, but then she fell back to the habits that had her hard of hearing alarms. They began ringing again, every nine minutes, and then continually. Sometimes I’d leave and come home in the early afternoon to find her alarm still blaring, right next to her dozing head, unheard.

Looking back it seems so obvious, the metaphor of the unheeded alarm. How the snooze button serves as an ineffectual means to put off the inevitable, because inevitably you wake up, right? Inevitably you face the alarm, right? You figure out how much time you have left. You open your eyes. You face it.

But truthfully the opposite happens all the time. It’s possible to stop getting up even if that used to be your specialty. It’s possible to lie down one day and never get up again, even though you have every reason to, even though people you love might be imploring you. Pulling on you. It’s possible to keep hitting the snooze button, to put off opening your eyes, to figure how much time you have left, to realize how little it really is, and to spend it sleeping.