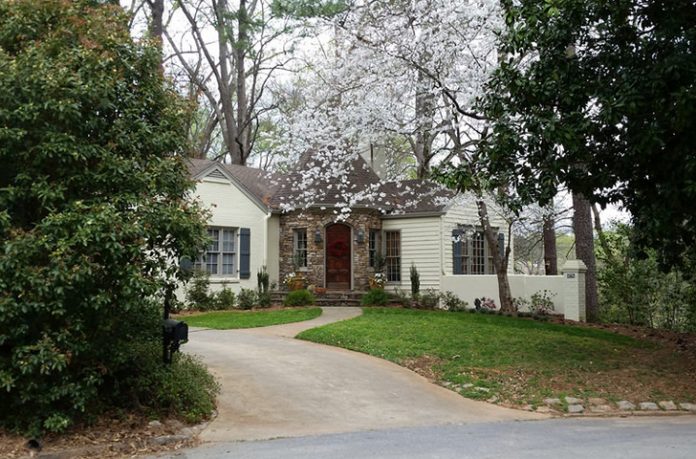 How does an architectural purist live in his own home? For Terry Kearns, who writes the popular blog Architecture Tourist, the answer may be best summed up as “meditatively.”

The Atlanta native takes a decidedly Zen-like approach to design, particularly interior spaces. A home should be intimate and even a bit mysterious, he says. “It shouldn’t show you everything at once. The foyer, for example, should be private, so that a person entering through the front door doesn’t have a clear view to the back of the home.”

Turned off by “cookie-cutter mega-houses” with their cavernous foyers, soaring ceilings, and open floor plans, Kearns prefers smaller, cozier dwellings. His own four-bedroom Morningside home, which was built in 1949, has 2,263 square feet. He and his wife JoAnn bought the house in 1977. Ten years later, they hired local architect Bill Harrison to design a renovation that included a two-level addition with a new master bedroom suite, family room, and office.

The home’s former living room became a guest bedroom and bath, and the former dining room became an entrance, powder room, and art gallery. On the exterior, Harrison added a stacked stone silo to connect the old with the new, giving the home a French Normandy farmhouse appearance. The house also has a screened porch, deck, and private back yard.

Although the Kearnses recently decided to downsize and sell their “one-of-a-kind, not-so-big-house,” as Terry describes it, they plan to stay in Atlanta, where he will continue to chronicle the city’s landscape.

Though not an architect himself, Terry has always been interested in art and design and writes about it with gusto. He rejoices when he discovers a great new neighborhood and despairs when he learns that one of the city’s historic buildings will be destroyed. Documenting Atlanta’s ever-changing skyline, he often takes the last photographs of soon-to-be-demolished landmarks. Terry, who is on the board of directors of the Atlanta chapter of the Congress for the New Urbanism, is particularly interested in preserving the city’s in-town churches, which, he says, are “our best collection of buildings.”