Looking back, asking Waze to find a liquor store in the middle of rural Texas for four women in a rental car probably wasn’t a good idea. We were headed for the antiques fair in Round Top, a remote cow town halfway between Houston and Austin with a population of 90—except during the annual spring and fall markets, when as many as 150,000 visitors descend upon the village for one of the nation’s largest antique festivals.

Our host, Lisa Rieves, was a veteran Round Topper who’d arrived from Atlanta a few days earlier. She’d warned us to BYOB. Unfortunately, we’d gotten distracted and driven right past her recommended exit. Looking for an alternative, we turned down an alley that wove through an abandoned industrial park. The GPS app had directed us to a cinder-block hut with dusty windows covered by burglar bars. “I’m guessing they don’t have Whispering Angel,” someone said glumly from the back seat.

The proprietor pointed us toward a nondescript black door, which—thank you, Waze—opened to a climate-controlled cellar with a modest but respectable selection, including the cult-favorite rosé. We claimed our good fortune as an omen. Indeed, our Round Top adventure would prove full of serendipity.

The second thing to remember is that treasure hunting here requires stamina. Traffic can try your patience on the two-lane highway, which is lined with vendors for some 20 miles. Rain turns walkways into mud pits, and every once in a while you catch a whiff of cow manure. There are almost no bathrooms, only porta-johns. Needless to say, you’ll want sensible shoes.

Promoter Emma Lee Turney organized the first show nearly 50 years ago in the local schützenverein (aka rifle club hall). The festive affair was an immediate hit with Houston socialites. Soon it became biannual and spread to a tent, a dance hall, and then to the nearby towns of Shelby and Carmine. Competitors began arriving a week or two before the big shows, setting up in nearby fields and branching beyond fine antiques into collectibles, architectural artifacts, and just plain junk.

The recession helped put Round Top on the national radar. The state’s economy survived relatively unscathed, and word spread that Texans still had money to spend. As more dealers arrived, designers started to take notice. In 2010 Rachel Ashwell, the Londoner who literally invented the Shabby Chic brand, fell in love with Texas Hill Country and opened a bed and breakfast here called the Prairie. Long-time Round Top seller Junk Gypsy—known locally for hosting the wacky biannual Junk-o-Rama Prom, where revelers party in vintage attire—built its first brick-and-mortar store here in 2013. National exposure has helped them attract celebrity clients like Blake Shelton, Miranda Lambert, and Dierks Bentley. Of course, it hasn’t hurt business that HGTV’s ubiquitous Joanna Gaines lives nearby in Waco.

Established sellers now arrive early and comb the fields for merchandise to resell days later, says David Stall, whose Round Top guide, antiqueweekend.com, garners some 1.4 million annual page views. “A cynic might say what’s happening is things are getting marked up, but I would say someone’s making style decisions for you and collecting the crest of current trends so you don’t have to sift through everything.” Indeed, that symbiotic relationship between high and low has led to great prices and an unparalleled selection. In 2013 a Huffington Post contributor called Round Top the “World’s Best Antiques Fair,” preferring it over Buenos Aires’s San Telmo, London’s Portobello Road, New York’s Brooklyn Flea, and Paris’s Puces de Saint-Ouen.

Rieves started going here in 2015 when she opened her store, the Front Porch of Vinings. Texas sources have helped her establish Front Porch’s unique rustic-luxe flavor, where you might find a scruffy vintage picnic table next to an acrylic console with modern gold lamps, or locally crafted chandelier earrings next to cowboy boots. “In this day, when people can see so much online, anybody can get what they want when they want it,” says Rieves. “But when those Round Top trucks come back to the store, it’s gangbusters here for a couple of weeks.”

Rieves is not the only Atlanta merchant who goes to Round Top. Lisa Burnett, a Chamblee dealer who has been showing there for nine years, says, “Atlanta shoppers have told me that they decided not to go back because everyone they bought from ended up being from Atlanta. They just ended up paying to ship everything back home.”

The few indoor sellers—such as the Red Barn (which now houses Turney’s original market) and the new hangar-like Market Hill—stock merchandise with more of a pedigree, but the fields provide the quintessential Round Top experience. Concentrated around Warrenton, a junction just south of Round Top proper, long rows of multicolored tents with section names like Rose of Texas or Granny McCormick’s are tucked beneath gnarled live oaks.

Even the more upscale items here are relatively affordable. Our photographer, Emily Followill, scored an antique Turkish rug—in perfectly muted neutral tones with just the sweetest hint of blue—for about what I’d just paid at home for a mail-order reproduction. Bonus points because her find came from hunky Hans, a French dealer who stocks an elegant selection of painted furniture, crystal chandeliers, rugs, and chic accessories (I still regret not buying those white marble pears).

At night, we collapsed at Rancho Pillow, a 20-acre compound that is sort of an Oaxacan version of Howard Finster’s Paradise Garden. In our three-bedroom house—one of several possible accommodations, including a teepee—Otomi pillows, Day of the Dead skeletons, retablos, hand-painted tile, folkloric textiles, and punched tin complemented brightly painted walls, furniture, and floors. Three of us tucked into a fanciful bunkroom that felt like a loft in Snow White’s cottage, only Mexican. Instead of white terry robes, there were tied-dyed caftans appliqued with giant benevolent third eyes. And though our place had two bathrooms, we all preferred the novelty of the cedar twig–lined outdoor showers.

We combed the turf for three full days, pausing only for sandwiches and cold beer—mostly at diners set up in trailers. The owners of Texas Pizza Wagon have erected a wood-burning oven right in their front yard. Our only restaurant meal was a dinner at the ridiculously quaint Royers Round Top Cafe, where the walls and ceiling are thickly layered with yellowed photographs, vintage menus, T-shirts, and the random plastic lawn ornament (think the Red Bar in Grayton Beach, Florida).

But the meal we’ll never forget was the “Feast in the Field” at Rancho Pillow. These outdoor Antiques Week dinners sometimes sell out months in advance. Owner Sheila Youngblood sets one long wooden table for more than a hundred diners with colorful folk art and mismatched vintage china. On the night we dined, guest chef Robert Lyford of Patina Green in McKinney, Texas, served four courses largely in jars or take-out and bento boxes. Kimchi, pearled farro, beetroot, carrots, and pork got passed down the table in waves. As the sun started to set, Youngblood’s 1950 turquoise Studebaker truck pulled up, towing an Australian folk band like a parade float. I gazed up into that big violet Texas sky and thanked my lucky stars.

Our final morning, as Rieves had predicted, offered the best shopping because it marked opening day at Marburger Farm. If you can only visit one venue at Round Top, go here. Marburger is what separates the junkers from the designers, the bargain hunters from the aficionados. It’s not that the antiques here are the finest or even the most expensive, though many are; it’s that they are the most authentic and best of their kind—whether you’re hunting for retro highball glasses, tramp art, French landscape paintings, or British campaign furniture.

We managed to case all nine tents and a dozen historic buildings by lunchtime, collapsing at tightly packed picnic tables with heaps of barbecue beef brisket and enormous cups of iced tea. Turned out the woman sitting next to us was from Smyrna. Atlanta has definitely come to Round Top.

Where to stay
Rancho Pillow offers a range of accommodations, from the Red House (where we stayed) to the air-conditioned Tee Pee (from $300). As the area’s few small inns can fill up during markets, the Round Top Chamber of Commerce will help you find lodging.

Pie orders
Royer family pies are a Round Top tradition. Below, daughter Tara tends their sandwich-and-pie stand in the front yard of the Junk Gypsy’s store. If you can’t travel to Texas, try ordering pies online, in flavors like Texas Trash, Not My Mom’s Apple Pie, and Bud’s Butterscotch Chip (from $35, royerspiehaven.com).

Show info
Pick up a free copy of the Show Daily tabloid for a comprehensive map of venues and a chart of their schedules. This info is also available online as a digital flipbook. The website antiqueweekend.com is another helpful source. Most shows are free, though a few charge admission fees of $10 or so. Marburger Farm merchandise sells fast, but you can order early shopping passes online ($25).

Shipping stuff home
Various shipping companies serve Round Top. We used Atlanta-based Distinguished Transport, which has offices at Round Top and will ship any purchases, large or small. They will even pick up your purchase from the vendor.

Cell phones
Be forewarned that cell service is sketchy in the fields, which unfortunately can limit your Instagramming.

What to pack
Comfortable shoes, rain gear, hat, hand sanitizer (most porta-johns do have hand-washing stations). 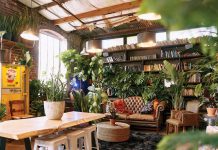 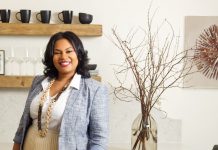 Give your house an earthy, organic vibe with this Atlanta designer’s decor picks