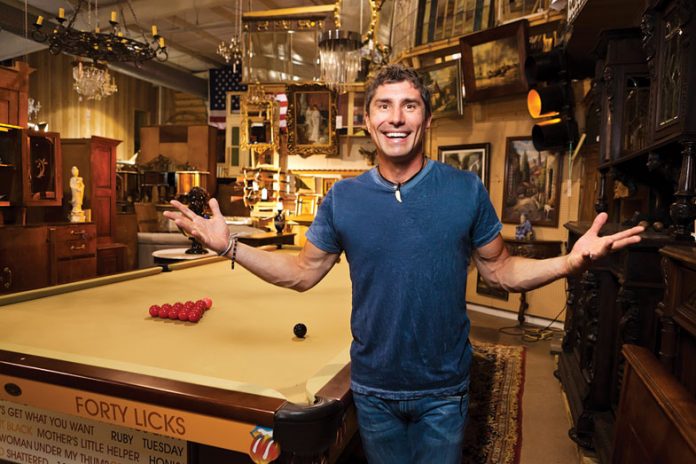 Antique auctions attract unique characters. Eccentrics, hoarders, and quirky dealers have turned reality shows such as Pawn Stars and American Pickers into hits. So when Discovery Channel launched its own auction series, Bidder Rivals, casting took top priority. The channel found its Ty Pennington in Paul Brown, owner of Gallery 63 in Sandy Springs—who has the same rugged good looks and enthusiasm for his trade.
Brown’s parents own the famously outlandish Red Baron Antiques, another Sandy Springs auction house known for regularly selling extravagant lots such as a flying car, the Babe Ruth contract rumored to have started the “Curse of the Bambino,” a mechanical E.T. from the movie, and entire interiors of European churches and pubs. Brown himself garnered national headlines in 2007 when he nearly auctioned off a small collection of Martin Luther King Jr.’s personal papers, offered by an old MLK associate at WAOK radio. King’s heirs halted the sale at the last moment.
Television suits Brown’s personality. He is charismatic, handsome, and talkative—if a bit spastic as he leaps through the gallery, oblivious to its fragile inventory. “I operate on volume,” he explains in a single breath. “I’m not gonna make much on any individual piece, but I am gonna sell a lot of individual pieces.” Eyes darting around the room, he points to a punch bowl and adds, “I don’t have to wait until someone pays me $500 for that. I’ll sell it for $50, make $25, and get on to the next item.”
The show, scheduled to debut this month, highlights unique items—such as episode one’s nineteenth-century vampire-slaying kit—and the intriguing sellers, buyers, and experts who surround them.
Before a monthly sale, every inch of gallery space is covered with paintings, jewelry, crystal, porcelain, relics, mirrors, and rugs. Chandeliers and fixtures hang from a lighting truss suitable for a Rolling Stones world tour—which is appropriate considering one of the band’s own snooker tables sits underneath, the iconic tongue and lip logo in Vegas-style neon on the wall above.
Like a Vegas casino, Gallery 63 lacks windows but keeps ample supplies of food and booze on hand, gratis for buyers. Appropriately, the environment is equally as stimulating and terrifying to a newbie.
Instinct says to flee the chaos before blowing the 401(k) by accident, but no worries. Although the room is loud and customers signal significant investments with the slightest of twitches, the auctioneer recognizes an intentional bid. The fear of inadvertently buying a African chieftain’s priceless throne eventually subsides, and that’s when the magic starts. The auctioneer’s rhythmic cadence changes to a hum and fades into background noise for intelligible conversation. After obtaining a bidder number from the front desk, the rube goes from terror to exhilaration with the first wave of the placard. The only challenge is deciding when to stop bidding on that row of Olympic stadium seats from Turner Field. Gallery 63, 4577 Roswell Road, 404-252-2555, gallery63.net
This article originally appeared in our September 2010 issue.
Advertisement