In 1962 a chartered plane crashed in Orly, France, killing 106 of Atlanta’s core art patrons. Afterward, it seemed the light went out of the art scene here. But three years later, a group of energetic, civic-minded women lit the spark again, establishing the Forward Arts Foundation to support the visual arts, the group’s mission then and now. Nonagenarian Anne Cox Chambers is the only surviving founder. In a 2011 Atlanta magazine interview, she recalled, “Twelve ladies decided to [form the group], and some of the men who didn’t like women interfering named us the ‘Dirty Dozen,’ and we loved that! We were very proud of that.”

Celebrating its 50th anniversary this year, the nonprofit FAF supports both arts programming and individual artists. Major beneficiaries have included the High Museum of Art, the Atlanta History Center, the Michael C. Carlos Museum, and the Museum of Contemporary Art of Georgia (MOCA GA).

FAF’s most visible operation is the Swan Coach House, on the grounds of the Atlanta History Center. In 1967, when the women converted an old garage into a restaurant—with its iconic chicken salad, famously accompanied by a slice of frozen fruit and a swan-shaped pastry for dessert—they used their own recipes as well as their personal silver and china.

In the early 1980s, Sara Moore, an original trustee, donated funds to add an art gallery to the complex. “My aunt, whom I am named after, conceived of the gallery to expose and educate the community about art,” says Sara Hehir, gallery chair. FAF member Catherine Rawson oversaw its design, hiring classical architect Caldwell Smith. Marianne Lambert has served as curator for 15 years, conducting six shows every year. A highlight of 2015 will be “50 Years of Philanthropy” (February 27 to March 20), spotlighting significant FAF contributions to local art institutions.

In 1999 the FAF established the Emerging Artist Award, after members grew concerned about a lack of public funding for local artists. Past winners have ranged from Born, known for his street-inspired pieces, to Venezuelan-born Lucha Rodriguez, who creates abstract mixed-media compositions. “We’ve seen other Atlanta arts organizations now doing similar things,” says longtime member Becky Warner, “and that makes us happy. It’s important for Atlanta artists to remain in Atlanta and continue to grow the artistic culture at home. 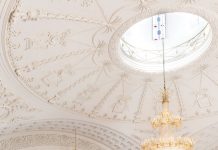 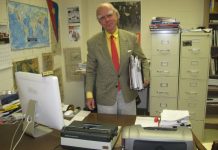