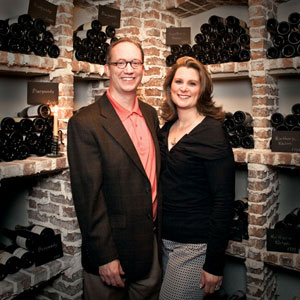 Wine distributor Michael Hirsch and his wife Janie have visited vintners’ private collections across the French countryside. So when the couple added a cellar to their Johns Creek house, they looked to Europe for inspiration. There, wine is usually stored in stone or brick bins rather than in the wooden racks often seen in the U.S., says Janie, an interior designer. “We decided to go for a similar ‘underground cave’ look. Since you always want to make sure that the corks don’t dry out, wine cellars should be moist and cold,” she explains. “For that, you need all hard surfaces rather than wood that might rot.”
Originally, the Hirsch house had nothing more than a dirt-and-clay crawl space, so the couple tackled structural changes first: moving existing electrical systems and creating a basement with concrete floor and walls. Even though the wine cellar was situated underground where temperatures are cooler, a refrigeration unit and extra insulation were needed for the storage area.
Once the mechanics were in place, Janie began the creative part. She located old-looking bricks at a local brickyard to use for shelving, which was reinforced with steel. “I told the bricklayers to make the mortar around the bricks really sloppy for an Old World look, as if it’s oozing out of the brick,” she says. Each bin is arranged by vintage or region, with bottles stacked and chalkboards listing the contents of each compartment. Slate floors and hard-coat stucco walls complete the cavelike ambience.
Outside the cellar, Janie created a comfortable tasting area with club chairs and a table. “Some people put tasting areas in the cellar itself, but since you’re supposed to keep the wines at about 56 degrees, that’s a little too chilly,” she points out. To give their entertaining area a publike coziness, Janie added black paneling, berry-colored walls, and a gold ceiling. Maps of French wine regions and antique wine accessories provide conversation pieces, while antique lanterns allow candlelit gatherings. Friends and family now head straight downstairs. “This is where we end up every time we have people over,” says Janie. jhirschinteriors.com
More Tips for Home Cellars
› When adding a cellar, hire an experienced builder or installer who understands the room’s special requirements. For instance, the Hirsches’ storage area includes a drip pan that evaporates and humidifies the air (to keep corks moist). It also includes insulation with a moisture barrier similar to the material used around bathrooms.
› The Hirsches keep the temperature between 56 and 57 degrees so white wines and champagnes stay properly chilled, although Janie recommends not serving wines at that temperature. “Ideally, you should drink [reds] at a temperature somewhere between that found in a wine cellar and room temperature, so take the bottle out and let it sit for a few minutes before opening,” she says. White wines should be chilled slightly more, so pop them into the refrigerator for thirty minutes.
› Michael recommends taking time to fill a wine cellar with true favorites. “People often fill a cellar too quickly and are stuck with wines they don’t enjoy,” he says. “Never buy solely on ratings or friends’ recommendations. Find your own gems.”
› Even though cellars are for storage, don’t let your wines get too old, Michael cautions. “It’s better to drink a year too early than a year too late.”
This article originally appeared in our December 2010 issue.
Advertisement