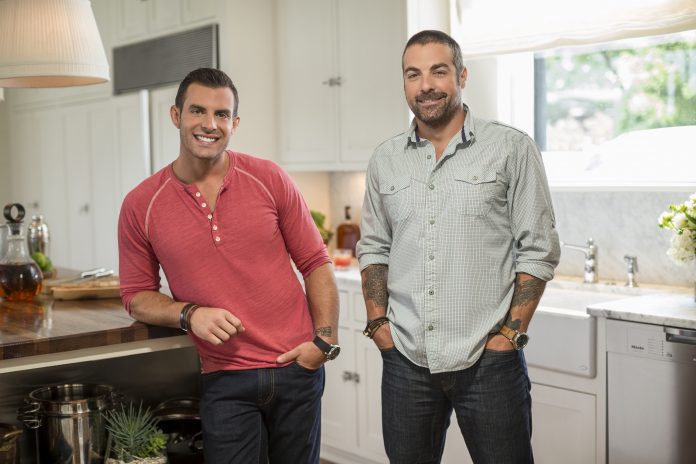 Cousins Anthony Carrino and John Colaneri—best known as hosts of HGTV’s and DIY Network’s  “Kitchen Cousins,” “Cousins on Call,” and “Cousins Undercover” —were recently in town to promote their upcoming show, America’s Most Desperate Kitchens. The New Jersey natives grew up in the construction business and have business-related degrees, but somehow they keep finding themselves back in the kitchen.

“Kitchens are the heart of the home,” says Carrino. “We design them in 90 percent of the renovations that we do.” Adds Colaneri, “The kitchen is the most complicated and functional room in the house.”

But don’t expect these two to stamp out standard-issue spaces. In their re-dos, bright orange or yellow panels might replace dull cabinetry. And rather than white subway tiles, the cousins might use stainless steel or colorful crushed glass. Once they created an entire backsplash using magazine type (Rex Ray “Type” for Modwalls).

“Right now a lot of texture is on trend,” says Carrino. “There are also a lot of earth tones and saturated hues.” Adds Colaneri, “In a kitchen, you can layer so much—floor, cabinets, appliances. Lighting is one of the biggest key elements—even the lightbulbs.”

Of course, the cousins were in Atlanta at the 2015 Design Bloggers Conference to plug (pardon the pun) Cree LED lightbulbs, which are, BTW, pretty fantastic based on my own quick test. They claim to last 25 times longer than an incandescent, now offer soft white illumination, have top vents to prevent overheating, and come in a high-tech version that can interface with your smartphone. Pricing on this type of bulb has dropped dramatically, and they are now available for under $8 at Home Depot.

Desperate Kitchens, which is currently filming in Sacramento, Nashville, and Austin, will move around the country (air date not yet announced). Homeowners can apply by submitting short videos. But winners won’t know they’ve been chosen until the cousins knock on their doors (finalists are warned to stay home). Owners move out for four days, returning only for the big reveal. No word on when Atlanta might be selected for filming. It all depends on how many locals apply, says Carrino. So, Atlanta, let’s get those submissions ready so that we can make people forget that other Desperate reality series based here!