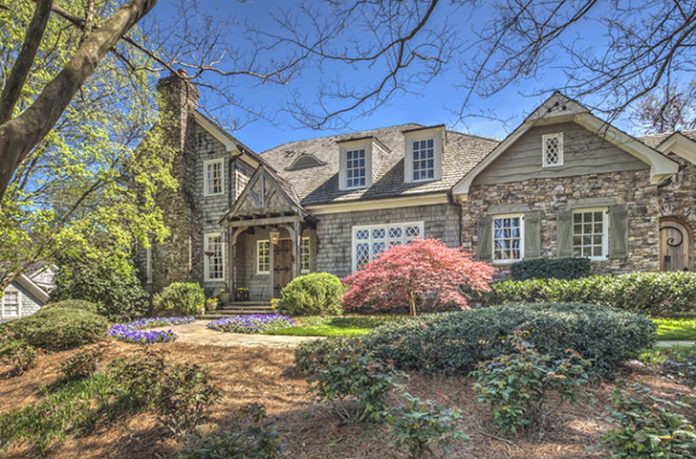 When Jim and Jacqueline Adams, owners of Jacqueline Adams Antiques, first set their eyes on the unfinished house at 211 Blackland Drive back in 1996, they knew they had found their new home. The Tuxedo Park residence, designed by acclaimed Atlanta architect Norman Askins, was being built as a spec house, albeit a very high-end one. Askins says he designed the home to have broad appeal—European in style, yet “not too French and not too English.” He also wanted the home to have “lots and lots of character.”

Jim and Jacqueline, who were living in Alpharetta, realized right away that the Anglo-French house, with its charming stone and shingled exterior, would suit them perfectly, not only showcasing their extensive collection of European furnishings and artwork but also shortening the commute to their showroom at the Galleries of Peachtree Hills. Their business specializes in 18th- and 19th-century French, Italian, and Swedish antiques.

Because the couple discovered the home early in its construction, they were able add a number of their own unique and interesting touches, such as beamed ceilings, antique European doors, and limestone and wood mantels. All the fireplaces, as well as a French balcony on the second level, are European imports dating to the 18th century. Even the basement is modeled after a French renovation, with high ceilings, tile floors, and a large bar.

The seven-bedroom home also has a library, office, mud room, keeping room, and in-law suite with kitchen. Several years ago, the couple added two bonus rooms, bringing the total square footage to just under 10,000. Even so, it doesn’t look, or feel, pretentious. “The scale is exactly right,” says Jim.

Despite their obvious affection for the home, the couple recently listed it for sale after deciding to move to Hilton Head, where their business originated in 1980. They will continue to stay involved in operations, although son Garrett and daughter Vicki, both of whom have been full-time employees for more than a decade, will manage many of the day-to-day activities.