It’s not every day that an antebellum estate goes up for sale, but Roswell’s Mimosa Hall—a 6,300-square-foot architectural and historical treasure that has been in the Hansell family for six generations—is just such a place, and it’s on the market.

Situated on nine wooded acres, the neoclassical style home was built circa 1840 by John Dunwody, a coastal planter from the Savannah area, and his wife, Jane, whose brother lived next door at Bulloch Hall (now preserved as a public museum). In 1867, General Andrew Jackson Hansell purchased the estate and moved from Marietta with his wife, Caroline, to become president of Roswell Manufacturing Company and rebuild the mills that had been destroyed in the Civil War. The couple raised their children in the home, which they named “Mimosa Hall” because of an abundance of mimosa trees on the property.

Interestingly, the estate left the Hansell family for a time. One of its most famous residents was noted architect Neel Reid, who purchased the home in 1918 and lived there until his death eight years later. Reid designed the estate’s gardens, as well as its long fieldstone driveway and courtyard, and made several modifications to the home’s interior, including removing a wall between two rooms to create a large double parlor. He also modernized the house with plumbing, electric wiring, and a furnace.

After Reid’s death, his mother and aunt continued to live at Mimosa Hall, where they operated a tea room on the lower floor. Eventually, the estate was sold to a local cotton broker, who lived there until 1947. It was then that General Hansell’s great-grandson, Granger Hansell, and his wife, Sarah Belle, saw a “for sale” sign on the property and decided to reclaim it for their family. After their deaths, the home passed to their son, Charles Edward “Ned” Hansell, a prominent Atlanta attorney, and his wife, Sylvia, who resided there for more than 40 years. Their daughter, Sally, now lives at Mimosa Hall.

The four-bedroom home features soaring ceilings, heart-of-pine floors, a large dining room, a library, and 10 fireplaces. The foyer has classic black-and-white marble flooring. Architectural details are found everywhere—from crown moldings to bookcases. Painted Italian doors between the dining room and drawing room came from a Vanderbilt mansion in New York and were installed by Sally’s grandparents.

One of Sally’s favorite features is the large attic, which stretches over the entire house. “Where it runs over the porch, there’s a stage with rafters,” she says. “Legend has it that children often performed plays there.”

The gardens include century-old trees, boxwood hedges, parterres, stone walls, and a grassy lawn once used as a tennis court. There’s also a swimming pool and a 19th-century grist mill refashioned into a barn. According to Sally, her parents and grandparents loved to entertain, and they held many parties, family gatherings, and charitable functions in both the house and the gardens. Her grandfather and father shared a particular passion for exotic and interesting trees. “They added many specimen trees to the gardens and created a botanical paradise,” she says.

Although Sally has decided to downsize, she has mixed emotions about leaving her beloved Mimosa Hall. “I can’t take it with me, and I have to choose a time to let it go. I think this is the right time.” She says she’ll treasure her many wonderful memories of the house and gardens, including reading in the library beside a fire, watching foxes from the back porch, picking turkey figs, hearing the chorus of frogs at night, and, of course, smelling the mimosa blossoms. 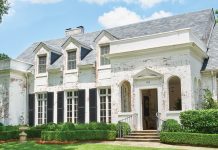 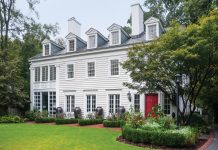 Designed by Neel Reid, this circa-1914 Druid Hills abode is a vibrant family home