When creating a room, the whole is always greater than the sum of its parts, stresses interior designer Melanie Turner. “Not everything needs to match,” she says. For a Buckhead home that she helped build in 2009, she devised a kitchen that is equal parts rustic and glamorous, steel and brass, modern and traditional.

Turner has never been hesitant about breaking a few rules, playing with scale, and filling a space with art—all trademark looks for this former Atlanta Decorative Arts Center Southeast Designer of the Year. Case in point here: An entire wall is dominated by a dramatic, eight-foot-long French range with a custom hood, both gleaming with stainless steel and brass accents. “They are definitely the jewels of the room,” says Turner.

Otherwise, the room is quiet and somewhat subdued, with Shaker-style cabinets, thick slabs of marble for both countertops and backsplash, and a wall of windows—the latter an addition by Turner’s builder husband, Stan Benecki, who is often her partner for new construction. “Stan loves to put windows on top of counters so you feel like you’re outside,” says Turner.

The designer keeps some kitchen essentials out of sight—such as the microwave, which is tucked beneath the island. Similarly, a pantry is hidden around a corner. Yet the bar area rivals any living room for sophisticated accessories: A large painting and lamp, both with roots in midcentury design, bring non-kitchen swagger to the space. Juxtaposing familiar and unfamiliar elements—such as wood plank walls set against a white faux-leather bench with nailhead trim—keeps the dynamic strong in this kitchen. Turner was partly inspired by a similar kitchen she designed that won an Architectural Digest contest.

“There’s something about a white kitchen that appeals to everyone, since it’s a throwback to the twenties, thirties, or forties,” says Turner. “Most of us didn’t grow up with marble countertops, so we appreciate that vintage look our grandmothers had—but with an update.”

Photographs by Emily Followill. This article originally appeared in our November 2013 issue. 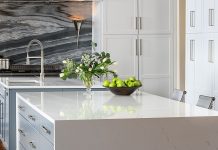