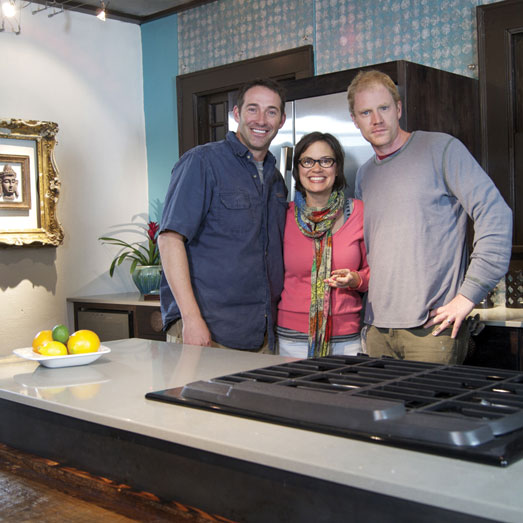 Knees bent, Ormewood resident Dan Bush cocks his sledgehammer like Casey at the bat. He and a few similarly armed friends eye their target: an eighty-year-old wall separating the kitchen from a pantry in the home Bush shares with his wife, Caroline.

“Wait on the camera,” says Josh Temple, licensed contractor and host of the DIY Network’s House Crashers. “Then I’m going to let you guys demo the f–k out of this.”

That word won’t make it on air, but the next moment will: Bush and company let loose on the wall like mad, hipster woodsmen, hacking it to bits as plaster settles like pollen on the dust-masked crew crowding the cramped space.

Ever since the Bushes moved into the slate-gray bungalow four years ago, “we’ve wanted to take a sledgehammer to the kitchen,” says Dan. Until now, the usually resourceful couple hadn’t tackled the dated (and today, they discover via Caroline’s shrieks, dead-rat-concealing) space.

The Bushes were approached by Temple while browsing at the Dump. The Crashers crew was on the lookout there for homeowners in need of help with a project, and the Bushes—unlike several other Dump customers that day—said yes immediately. But while they’re used to cameras (he’s a filmmaker who codirected 2007 Sundance success The Signal; she’s a wardrobe and prop stylist), they weren’t quite prepared for the gaggle of carpenters and designers, craftsmen and cameramen that arrived honking at the foot of their lawn this morning.

“I thought there would be more talking about what we would be doing, but no,” says Caroline as she waits for the dust to settle amid the tools and cords and appliances in the backyard. “It’s action!”

And it has to be. House Crashers—a newish spin-off of the Knoxville-based DIY Network’s already-successful Yard Crashers series—promises to conduct its duckling-to-swanathon in just three days. Each episode begins with an in-store “ambush” of unsuspecting shoppers. For the Atlanta project, local design/build company Clear Sky Homes kept everyone on task, and Lawrenceville’s Burns Century Interior Design created the “rustic modern” aesthetic desired by the couple. Stainless steel Whirlpool appliances, for instance, contrast with a large island in reclaimed barn wood by Southern Heritage Woodworks of Sylvester, Georgia. Textures range from slick, eco-friendly aggregate countertops to an industrial-looking metal ceiling.

But the best part? “The dishwasher,” says Caroline without hesitation. “I don’t have to do dishes anymore!”