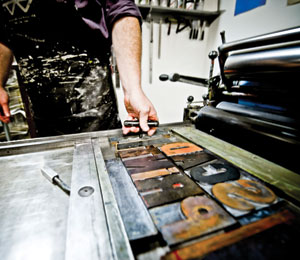 Photograph and video by Jamey Guy

As communication grows ever more digital, there has also been a revival of interest in handmade paper goods, especially those printed with an old-fashioned letterpress. Classes in bookmaking and relief printing—taught in a room full of hand-cranked and electric cylinder presses with type not fundamentally different from Gutenberg’s—are popular at the Savannah College of Art and Design’s Atlanta campus, where graphic designers relish the opportunity to get off a computer. Downtown, the Atlanta Printmakers Studio was opened in 2005 to provide hobbyists and professionals access to expensive equipment such as Vandercook proofing presses, a technology that nearly disappeared in the 1980s with the rise of desktop publishing.
Ironically, the craft has also been spurred by the advent of computer-generated polymer plates, which allow creative expression beyond the type blocks in a printer’s drawer. Now garage letterpress operations are popping up all over the country.
Blame it on Martha Stewart, who helped repopularize the medium in the 1990s. “It’s the new old aesthetic,” explains Rich Gere, one of SCAD’s printmaking professors. “Invitations and ephemera that have been punched into French, handmade paper have a dimensional quality.” Speckled ink, uneven deckled edges, and tactile impressions are traces of the human touch—an antidote to today’s flat, slickly produced digital graphics.
For your holiday correspondence, try these local presses: Bumblebee Press, Lemondrop Letterpress, and Red Bird Ink. Or find hundreds of vendors on Etsy.com or in local fine stationery stores.
This article originally appeared in our December 2010 issue.
Advertisement 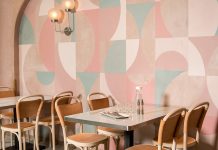 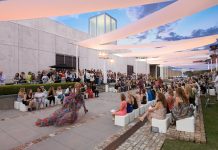 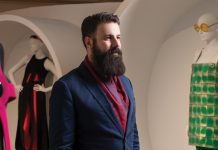