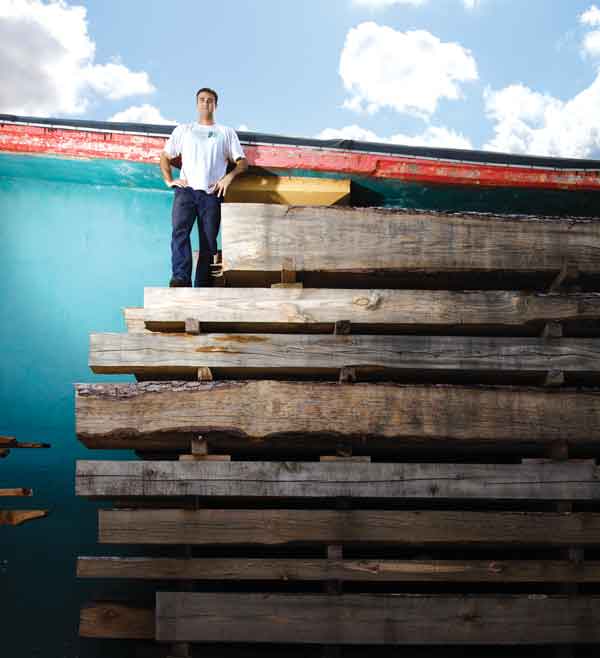 Imagine every inch of molding in a 9,500-square-foot house made entirely of poplar from a beloved family plot of land, or rustic oak countertops made of trees recovered from Oakland Cemetery after a tornado. A former Charleston surf bum, twenty-nine-year-old Darwin Crawford rescues, recovers, and resells trees that tell a story. “Atlanta’s cool; people want to use what’s local,” says Crawford of his adopted city. “Someone can send us their trees, and we can send it back as a product for their house.”
Whether it’s heart pine boards from rural Georgia or a four-foot-wide elm slab from one of the largest trees in the state, it can be found at Crawford’s Mississippi Wood Trader warehouse, or “reclaimed urban lumberyard.” The Mississippi native and Ole Miss grad typically keeps his trades within Georgia. “We call it logging locally,” Crawford explains. “There’s so much lumber in this city, you honestly don’t have to buy it from anywhere else.”
He got started by helping his parents rebuild after Hurricane Katrina. When he crafted a wine cabinet for them, his mother insisted it be made of aged cypress. “I had no idea what I was doing,” says Crawford, who had just quit his day job of manufacturing artificial golf courses. “I just got on the phone and jumped in the truck.”
Now he supplies antique and reclaimed lumber to prominent Atlanta builders, residents, and restaurateurs. His Westside warehouse is piled high with finds like old beams from Fulton Bag and Cotton Mills, elm trees “coaxed” from city workers onto Crawford’s truck instead of into a shredder, and Crawford’s personal favorite: river-recovered cypress. “Right now,” he says, “I’ve got some logs that are probably 1,000 years old. They were cut down around 1850, and you can still see the ax marks.”
While one of those pieces of wood might cost $3,500, a two-by-two-foot board could run as little as $100. Crawford plans to undertake increasingly larger-scale projects, like a current commission to make a conference table for Emory University out of campus trees felled during a storm.
“We kind of run the gamut,” says Crawford, who inherited a passion for forestry from his grandfather. “If a guy wants two sticks of hard pine to make a bedside table, we’ll give it to him and he can go and take the nails out of it and disappear into his garage until his wife wonders where he is.” mswoodtrader.com
This article originally appeared in our September 2011 issue.
Advertisement