Atlanta native Ryan Hughes was in fifth grade the first time this stately Spanish Colonial house in the Lenox Park area of Morningside caught his eye. “It has a presence, the way it’s positioned on the hill, and it just has this romance about it that people love,” says Hughes, who co-owns (with Steven Leonard) the fashionable ADAC showroom R Hughes, which offers glamorous furniture, lighting, and textiles. The house, which was built in 1935 and is thought to have been designed by famed Atlanta architecture firm Ivey and Crook, was updated in the early 2000s by celebrated interior designer Bobby McAlpine. Hughes reconnected with the house when he was in college and a family friend purchased it. Already a fan of McAlpine’s work, Hughes followed the renovation. The house, which is shaped like an airplane with swept-back wings, is just one room deep, providing immense natural light inside. Some of Hughes’s favorite features include the barrel-tile roof, striking mahogany windows with restoration glass, and Spanish-style cutout details on either side of the front door. “It reminds me of California,” says Hughes. “I love seeing that style in Atlanta—it’s not like every other house.” 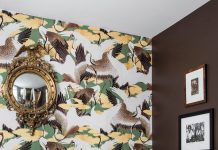 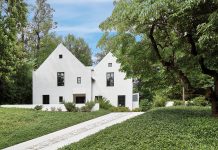 This Morningside home is both cosmopolitan and comfortable