Steve Marcinko still wears the same fluorescent-trimmed jumpsuit he bought in 1984—he figures it’s gone in and out of style at least three times. Of course, the flash of neon makes him easy to spot on the slopes. And for Steve and his wife, Karen, their Breckenridge penthouse condo has been all about easy. Their two-story unit at Beaver Run has six bedrooms and sleeps 20—a mere 50 feet from one of the main chair lifts. “Breck” has many beginner slopes located close to more expert terrain, which is helpful for families because it allows skiers of all levels to mingle, says Steve.

“The owner’s closet is a lot of fun when you’re a skier,” says Steve. “All your stuff’s already there. Your boots are already broken in, and away you go.”

Here at home, the Marcinkos are famous for staging elaborate barn dances at their Woodstock farm, where 2,500 guests were once treated to a private snowfall. And their hospitality has spread to Colorado, where they’ve hosted empty-nester escapes and New Year’s Eve parties. But mostly they enjoy gathering there with family. “I am not ashamed of openly bribing my own kids to come see us,” says Steve. “I highly suggest it to every parent.” 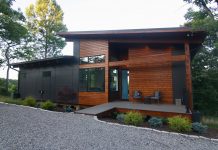 In North Georgia, a mini modern mountain home community like no other takes shape