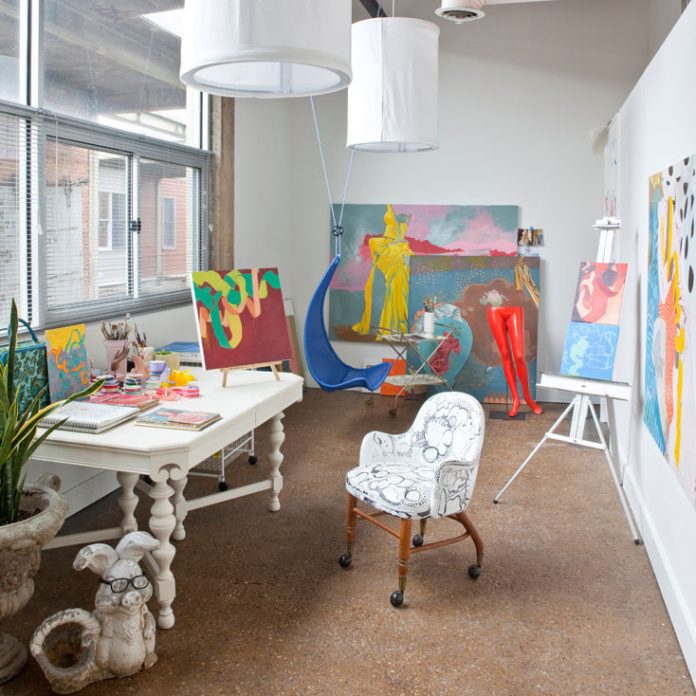 Angela Blehm gets to lead a double life. Most of the time, she’s a physician’s wife who homeschools her children, ages five, seven, and nine, out of a ranch house in Gainesville. But once a week or so, Angela morphs into a bohemian artist and heads to her Old Fourth Ward studio/loft, surrounded by exposed brick and funky furnishings.

“I tried painting at home with a sitter watching the kids, but I could still hear them and was always stopping to help them with something,” says Angela. “It breaks up the flow.”

She and her husband, Clayton, bought the loft partly as an investment (a cheap foreclosure deal) and also for intown date nights and family trips. As part of the homeschooling experience, Angela often takes her kids to museums and other enriching city sites. Mostly, though, the loft is a creative outlet for Angela, a place for the University of Houston fine arts graduate to rediscover her inner artist.

The 1,000-square-foot space was originally one open room, with industrial features like exposed brick and concrete floors. “I thought we were going to go dark and moody as the look at first,” says Angela, but some existing white appliances inspired her to think lighter and more feminine. The brick wall was painted white, and the Blehms upgraded the minimalist kitchen by adding plank walls, enclosing the refrigerator, and installing sculptural sconces.

To make the space more livable, they added three walls, creating four distinct rooms: a small kids area furnished with built-in yellow bunk beds and children’s art, a living room/kitchen, a master bedroom with the one bathroom, and a light-filled art studio. Angela cut rug tiles on the diagonal to make geometric runners linking the spaces, and she created the custom oversized pendants that are suspended from the eighteen-foot-high ceilings. Angela’s brother constructed the fixtures’ cylindrical frames with metal from their late father’s sheet metal factory. The canvas shades can be removed and washed.

Furnishings are a mix of flea market finds, family pieces, and Angela’s own paintings, as well as artwork by her children. One favorite vignette is a vintage three-drawer chest topped with a plaster female torso Angela found at Scott Antique Market. She surrounded the sculpture gallery-style with an assortment of her college art projects and sentimental items, such as a photo of her father.

In the living room, the focal point is one of Angela’s paintings, which she named Judy because the image, inspired by a 1950s magazine ad, reminded Angela of how her husband’s aunt Judy would’ve looked at the time. Also in this area are two French-style chairs that were originally dark wood and chenille, but Angela painted the frames light blue, upholstered the seats in blue twill, and splatter-painted them with bleach for a polka-dot effect. (Polka dots are a common motif in her work.) A vinyl office chair became a canvas for the kids after she painted it white and allowed them to write on it with Sharpies.
Earthy tiles in the bathroom are spalike, although plumbing fixtures are an unexpected hot pink. “You don’t see pink faucets in a bathroom very often,” she admits, “but I like a touch of whimsy.”

Although Angela treasures her solitary days, when she can lose herself for hours painting while the sun moves along the loft courtyard, family time in the city is just as important. “We love that now all of us have the opportunity to experience urban living,” she says.