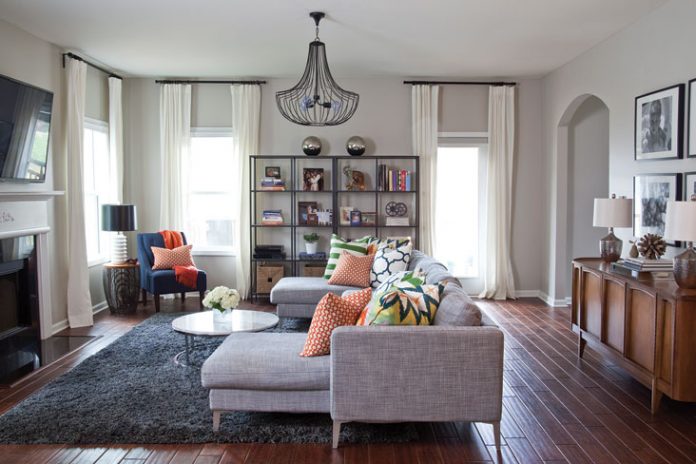 Don’t underestimate the power of social networking—in this case, it led to a new living room. Ashley Page, an in-house attorney for Google, posted on Facebook that she needed an interior designer for her Cascade area home, and a friend reconnected her with former Spelman College classmate Dayka Robinson.

Page and her husband, Justin, wanted a family-friendly area off the kitchen that would work for entertaining. “We’re not formal-living-room kind of people,” says Page. “In fact, I use what’s supposed to be the formal living room as my office.” Since the couple have two young children, most of their parties include guests of all ages, so everything needs to withstand wear.
“Ashley needed help with furniture placement and pulling it all together,” says Robinson, a local interior designer and blogger. “She also liked color but wasn’t sure how to use it.”

For the room’s centerpiece, Robinson selected an Ikea sectional but added some custom touches. “A lot of people turn their noses up at Ikea, but you’ve got to know how to use their products,” she says. She upgraded the slipcover to a linen blend and changed the feet.

Neutral gray walls allowed colorful pillows to add punch. Even though the fabrics cost as much as $150 a yard, not much was needed, and they’re inexpensive to change later, Robinson points out.

A large shag rug is actually two smaller rugs sewn together. “Rugs can kill your budget,” says Robinson, “so you’re better off putting two together. And a shag style will hold up better than sisal.”

The room has already lived up to its promise. “My husband and I live on that sectional during the weekend,” says Page.

This article originally appeared in our December 2013 issue.