“But what if they can’t figure out what’s wrong?” I replied.

It was our second weekend in my newly renovated home, and the house itself was amazing: a 1947 brick ranch transformed into a limewashed cottage with a stone front porch. It was me who was having problems.

I’m a professional worrier. When I lived in this house alone, every gurgle of the pipes, every sag in the floorboards had signaled a potential disaster. And every disaster meant a bill. The furnace had been my greatest source of anxiety. Five years ago I’d nearly emptied my savings to rebuild the HVAC system. Now here I was, standing in the kitchen with the man I’d married less than a month before. For the first time in my life, someone wanted to share the burden of homeownership. But I was having trouble letting him.

“Will you call the contractor?” I asked as we stared down at the metal floor register, which was blowing cold air while the rest of the ducts blew hot.

“He said give him a little time to think about it and he’d call me back.”

“He’s never going to call us back,” I declared. “He doesn’t know how to fix it.”

“If this is the hardest thing he has to deal with as a contractor,” Mark said, “he’s a lucky guy.”

In the two days it took for the contractor to call us back, I conjured up several worst-case scenarios. I’m a fiction writer—I specialize in creating dramatic narratives. I rattled off the possibilities to Mark: too much humidity in the crawl space, a flaw in the new HVAC, rats chewing through the ductwork.

“What if the contractor doesn’t believe the duct’s blowing cold air?” I asked. “What if he says the problem’s all in my head?”

I tried to keep a lid on it. But once that worry train leaves the station, it has to travel a full circuit around the track.

“What if I need a whole new furnace?” I said, starting to cry. “What if the house is so much bigger now that my old furnace can’t keep up?”

I’m 44; Mark’s 53. This is my first marriage, his second. I’d had relationships, but none involved cohabiting. Getting married meant sharing not just my heart, but my living space—my treasured solitude—with another person. With three people if you count his two daughters. I wasn’t sure I was up for all of this.

Mark took my hands in his. “Stacia,” he said, “the furnace is big enough. It can handle your new life.” He paused. “So can you.”

The next day the contractor came. He and Mark investigated the crawl space and discovered the problem. The faulty vent led to an old duct not connected to the HVAC. We simply needed to seal off the floor register and cold air would stop seeping in.

That night, as I stood chopping onions by the stove, the kitchen was toasty warm. Mark came up behind me and slid his arms around my waist. I leaned against him, free of worry at last. Then I looked up and spotted a growing crack in the ceiling.

“What’s wrong?” Mark said. In the distance, a train whistled.

Pelletier is the author of Accidents of Providence, shortlisted for the Townsend Prize for Fiction, and the recently released The Half Wives. She earned graduate degrees in religion and historical theology from Emory University. She lives in Decatur and works at Emory School of Medicine.

This article originally appeared in our Fall 2017 issue of Atlanta Magazine’s HOME. 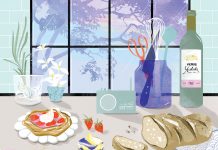