On May 2, the hottest ticket in town wasn’t for a Kentucky Derby party, it was for Thrift with Tyler. This sold-out event saw some of the city’s top designers—Michel Boyd, Kerry Howard, Joann Kandrac, and Kelly Kole, to name a few—and design industry professionals piling into a bus to visit West Georgia antique and thrift stores. As the tour fell on the same day as the Run for the Roses, the ladies of the GordonDunning design firm even showed up wearing fascinators.

Tyler Lynch is a native Atlantan who grew up working in his mother’s Douglasville antiques store—creating window displays and selling vintage finds that he sourced from a network of area thrift stores. Now his day job is metro Atlanta interior design territory manager for Codarus, an Americasmart home furnishings showroom. But he also helps small businesses with social media and generally networks in the design community. Colleagues started asking if they could ride along on his famous thrift store junkets—willingly complying with Lynch’s strict 8 a.m. departure rule. After all, his itinerary stretched all the way to Tallapoosa, at the Alabama line.

Last year, Lynch decided to go public with his favorite haunts, as long as the effort raised money for a good cause. He partnered with Dallas-based Dwell with Dignity, rented a bus, and promptly filled every seat. In fact, you’ll often find him standing so that he can sell just one last ticket.

Dwell with Dignity is like the interior design community’s equivalent of Habitat for Humanity. The nonprofit recruits volunteers and donations to create homes for families struggling with homelessness and poverty, including a single mother and her two sons in Atlanta. This year’s bus tour raised nearly $5,400.

Lynch kicked the day off at the Last Chance Thrift Store on Thornton Road, with further stops in Douglasville, Lithia Springs, and Villa Rica. “The best part about going to these remote locations is the hospitality is wonderful in small towns,” says Lynch. The most bizarre shop was undoubtedly Jane’s in Villa Rica. Slogan: “If we don’t have it, you don’t need it.” Imagine cramming the contents of about five old Woolworth five-and-dime stores into one tiny storefront—think bins full of doll heads, carts of used baseballs, shelves of ceramic figurines, and cards of buttons. Lynch swears he hasn’t been able to get upstairs since 2002.

The crowd was pretty rowdy even before the prosecco-and-berry cocktails provided by ADAC and a fundraising raffle with generous prizes such as original art and high-end home accessories. The day began and ended at  Steve McKenzie’s store. Follow Lynch on social media (@thriftwithtyler) to stay posted on his next outing. A fall tour and even a North Georgia itinerary are possibilities. And if you go, take cash. There’s likely no ATM. 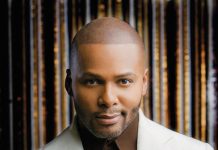 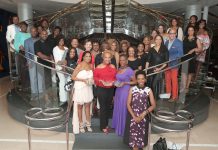 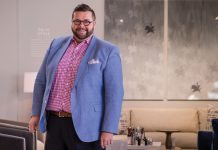