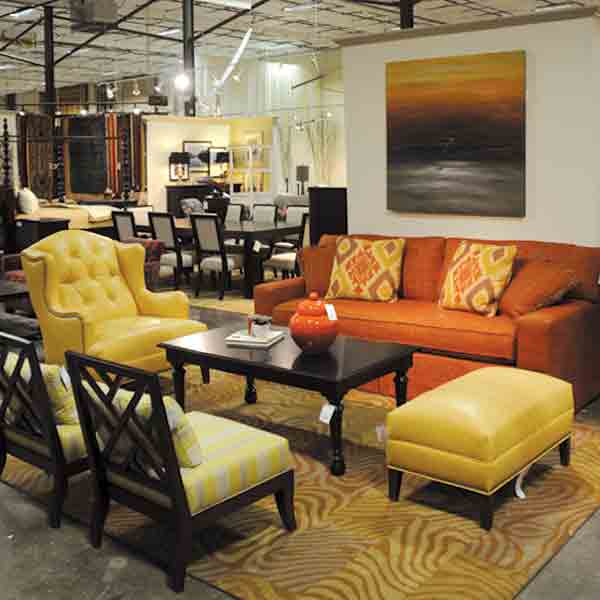 It’s the end of the world as we knew it, and it feels fine. Several years ago, World of Rugs started carrying home furnishings. Last year it added a custom design center and accessories. It was clear this burgeoning side of the business deserved more than “and Furniture” in the moniker, so the company changed the name to a much hipper brand: the Foundry.
Although the store is located in a former Ellsworth-Industrial metal-fabricating warehouse (train tracks ran right through the back), the name is more emblematic. “It’s a nod to the past,” says marketing director Stuart Spencer. “But it’s also a nod to the future. It symbolizes strength.” The label applies to the store’s proprietary line of upholstery and case goods as well, which range widely from marble-topped farmhouse-style tables and button-tufted headboards to Empire-style consoles.
In addition, the Foundry carries national brands such as Century, Bernhardt, Vanguard, Kravet, and Lauren by Ralph Lauren—all at bargain prices, such as $1,760 for a nailhead-trimmed, tight-back Bernhardt sofa that normally retails for $3,520. Of course, as befits its Best of Atlanta–winner status, it’s a great place to buy rugs. The Foundry carries 12,000 rugs, from shags to exotic Oushaks, most of which are hanging (even the twelve-by-eighteen-footers)—so there’s no tedious flipping through piles. Prices range from under-$300 machine-made bargains to one-of-a-kind, hand-knotted antiques. If you’re lucky, you’ll catch the Yumbii Korean taco truck out front.
This article originally appeared in our February 2011 issue.
Advertisement