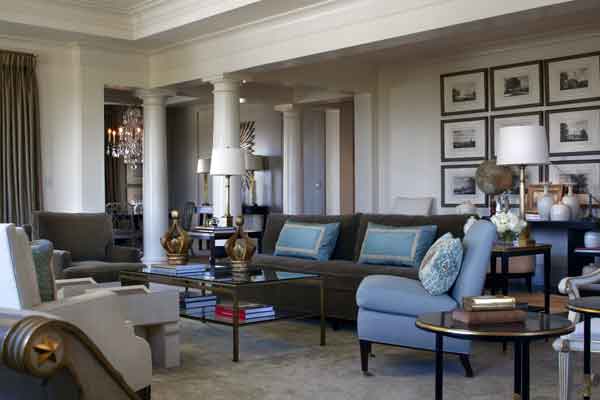 Legendary boosterism aside, Atlanta is still a young city aspiring to become a cosmopolitan center. Ironically, that ambition can be traced in the evolution of two iconic Sears locations. City Hall East, the retailer’s former warehouse, is on its way to becoming Ponce City Market, a multiuse foodie haven akin to Seattle’s Pike Place or Boston’s Faneuil Hall. Eight miles north, the site of Sears’s 1960s megastore, razed more than twenty years ago for Buckhead Plaza offices, is also home to the luxurious St. Regis Hotel and Residences—completed in 2009, amid a recession and an epic housing bust. The result? Half the contracts on forty-seven of the fifty-three condominiums failed to close. In February a Florida-based investment firm, the Tavistock Group, bought the St. Regis for an undisclosed amount. It has launched the residential equivalent of the daring but ill-fated Streets of Buckhead retail project. This time, however, chutzpah comes with deep enough pockets.

Tavistock, which owns more than 200 companies in fifteen countries, targeted the St. Regis as its first hotel acquisition. It is investing more than $10 million in upgrading the public areas and is seeking a high-profile restaurant. While Downtown’s W Hotel is “relaunching” its condos, beginning at under $200,000, and Buckhead’s Ritz-Carlton Residences start in the mid-$300,000s, the St. Regis has raised its prices to $750 to $900 per square foot (up from about $724 on previous sales). Units range from 3,200 to 9,300 square feet.

Doug McMahon, one of Tavistock’s managing directors and managing partner for the project, says Atlanta has a glut of condos under $2 million—a supply of as much as eight years, he estimates. But above $2.5 million, the inventory dwindles to around seventy-five units. “And we have twenty-nine of them,” he says. “We are not in a hurry to sell them.” Nonetheless, the first home sold the week the residences reopened in October.

Tavistock’s vision is less fast money than it is old Buckhead. Ninety percent of residents are Atlantans, with power couples like Coca-Cola Enterprises CEO John Brock and his wife Mary, Buckhead Beef Company cofounder Howard Halpern and his wife Lynne, and WSB radio host Neal Boortz and his wife Donna. McMahon is a hometown boy who grew up in Sandy Springs and proposed to his wife at Chastain Park. He pulls out a map of Buckhead and points to the St. Regis crest, located significantly west of Peachtree—an area shaded green for more than one reason. Here, verdant roads like Tuxedo, Blackland, and Valley wind past grand mansions designed by the likes of Neel Reid and Philip Trammell Shutze. Move into the St. Regis, and you can send the concierge across the street for Merlot at Pearson’s wine shop or ham sandwiches at Henri’s Bakery.

“It’s Habersham in the sky,” says McMahon, comparing the residences to elite apartments in Manhattan. “At the turn of the century, the grand homes of the Avenue gave way to high-rises. Owners moved up with a view of the city they helped build. We are confident we can sell out our offerings over the next four years. Atlanta is and will remain attractive to a core affluent demographic who want to have a residence here. These people are psychologically tied to Atlanta. They have created businesses here, they have family here, history here.”

Proving their commitment to proceed the Atlanta Way, Tavistock has hired some of the city’s most prominent designers, builders, and craftspeople to renovate the public areas and complete four model homes. Celebrity designer Stan Topol has created two art-filled homes with just the right contemporary edge. Patricia McLean, whose monied clients include the Governor’s Mansion, has outfitted a unit with enough tassel-trimmed silk, de Gournay wallpaper, and dentil molding to make Buckhead empty nesters feel at home. And shelter-book darling Suzanne Kasler has conjured up a cosmopolitan, airy space that feels like a Paris flat overlooking the forest that is Atlanta from the air.

“The St. Regis has kind of brought a way of living to Atlanta, even [different] from the other high-rises, that has not been done previously,” says Kasler, pointing to its unique neighborhood setting. “It has just a very chic and continental feel. You think of London or Paris or New York. The St. Regis kind of changes the marketplace.”

Another unusual feature is that the condos have very few interior load-bearing walls, allowing owners to customize floor plans without columns. McLean took advantage of this flexibility to make her space feel more like a single-family home. She reversed the locations of a study and a bathroom and enlarged the master suite. A wide hall, with a herringbone-patterned walnut floor and a serpentine-top table, leads to the master. French-polished flame mahogany doors—with a brass-plated doorbell—create a sense of entry by the elevator.

The ten-foot-plus ceilings and generous-sized spaces made it easy to use antiques, but selecting paint colors was more challenging in a high-rise, notes McLean. She hand-mixed dozens of shades before finding the right formulas. “The colors change when you get that high in the sky. They’re different every hour up there,” she says. “But ultimately, as a designer who enjoys working with the colors found in nature, it was delightful for me to be at eye level with the sunset as inspiration.”

Whatever their style, all St. Regis residents enjoy five-star amenities. Room service, dry cleaning, pet walking, and catering are all available 24-7. And, in a tradition dating back to the first St. Regis on New York’s Fifth Avenue, every day you can come downstairs for a Champagne sabering at happy hour.

This article originally appeared in our December 2011 issue.