“Bathrooms are spaces with lots of hard surfaces,” says interior designer Breckyn Alexander. To warm up the tile and metal in this teenage girls’ bath, the Athens-based pro, who also owns a home furnishings boutique, incorporated design elements typically spotted in other areas of a house: salvaged doors, antique rugs, and conversation-piece lighting. “I’m a sucker for anything aged or vintage,” says Breckyn. “Not a single project of mine escapes without a vintage or antique element.”

This bohemian look also jibed with the tastes of her clients, Bailey and Mary Wilson Carter. Their father hired Breckyn to turn this space in his Lake Oconee house into a welcoming retreat for his teenage daughters, so the designer started exchanging ideas with them online. “I have private Pinterest folders for all of my clients,” explains Breckyn. “It’s a great way to talk back and forth in real time. With my schedule being different than the girls’, it allowed us to communicate in a way that worked for each of us.”

The newly constructed room’s architecture provided a starting point, says the designer, particularly since she wanted to play up the arched window. Breckyn and contractor Ian McClure combed a wood salvage yard in nearby Monroe, selecting a hand-hewn beam as an accent for the window. Antique Chinese doors found at Scott Antique Markets added another warm touch.

Because of the room’s small square footage, Breckyn angled the bathtub to improve access, which also added to the room’s quirky charm. “The design of the space was a perfect game of inches, but the overall intent was for the space to seem light, airy, and organic in flow,” says the designer. Symmetrical vanities have custom brass legs and octagonal brass mirrors, designed to get the proportions just right.

Moroccan-inspired terracotta tiles by Waterworks strike a bold pattern in the shower and help cozy up the 12-foot ceilings. Rounded edges on the shower curb echo the arched window. “This was the first time I designed a rounded shower curb,” says Breckyn. “It ended up being perfect for this project because the rounded edges played right into the organic feel.”

“This bathroom design is a balanced mix of the girls’ interests in global travel, natural elements, and modern design,” she says. “The design isn’t meant to reflect anyone other than the clients.” 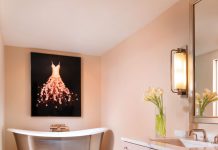 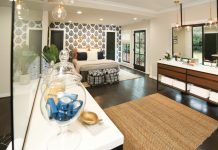 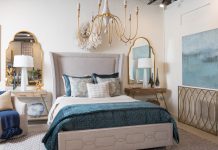 12 of our favorite neighborhood design shops in metro Atlanta