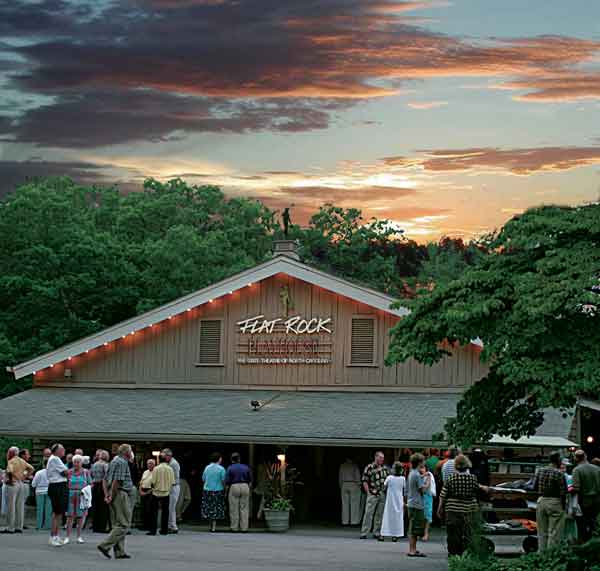 My friend and I followed national park ranger Peter Goldsmith into the modest, fifties-era living room of Connemara, Pulitzer-winning poet Carl Sandburg’s home in Flat Rock, North Carolina. “Have you ever been to Biltmore?” Goldsmith asked, referring to George Vanderbilt’s Gilded Age chateau in Asheville. “This is the antithesis of that.”

A similar comparison could be made between Flat Rock and Asheville—the former a little more weathered, a little less tended than its neighbor thirty miles to the north. But both towns beckoned wealthy coastal Carolinians retreating from the oppressive summer heat; Flat Rock became known as “Little Charleston of the Mountains.” Sandburg, urged by his wife, Lilian, relocated here in 1945 due to the extremes of another season—winter in Michigan.

White-columned Connemara with its 264-acre grounds was the first poet’s residence to be named a National Historic Site, in 1968, a year after Sandburg died. The $5 home tour will mesmerize logophiles: 11,000-plus books on floor-to-ceiling shelves, spines begging to be read; stacks of historic magazines (Sandburg had subscriptions to fifty); the folk-singing writer’s guitar. Periodic storytelling events keep the literary legacy alive (Christmas at Connemara is next, on December 10). And kids love petting the descendants of Lilian’s prize Chikaming dairy goats, lolling in the pastures out back.

Flat Rock eschews the airs of other Tar Heel towns popular with Atlantans. Meadows and lawns overflow with wildflowers, and anachronistic window units dot most lodges and inns. The shadows cast by towering Glassy Mountain—the top of which can be reached via a dog-friendly walking trail at Connemara—further blur Flat Rock’s place in time.

Staying at the 1852-built, Victorian Mansouri Mansion—which claims to be the oldest inn in North Carolina—corroborates the bygone mood, with its chandeliers, sweeping veranda, and Confederate portraits; a pub and cozy, Gallic-influenced restaurant cheer the place. Families may prefer the privacy afforded by Highland Lake Inn. Its resortlike campus includes storybook cottages, and afternoons can be spent paddleboating or canoeing on the lake, practicing yoga, or exploring the organic garden that supplies on-site Season’s restaurant, easily Flat Rock’s finest (yet still pretty relaxed) dining. Its abundant Sunday buffet is much heralded, but dinner, with gourmet specials such as duck cloistered in fig preserves and parsnip risotto, also entices, especially on Flat Rock Playhouse performance nights.

The playhouse, North Carolina’s state theater, celebrates its sixtieth anniversary next year, and traveling from all over the Carolinas to see musicals and plays there is a regional tradition. Its barnlike venue rests on the sprawling slab of granite for which the town is named, perfectly reflecting Flat Rock’s alluring rusticity. A few wobbly accents aside, a recent weeknight rendition of Agatha Christie’s The Mousetrap impressed—and was packed (mostly with retirees, who, along with artists, seem to be the burg’s bread and butter). A summer music series and a new outpost in nearby Hendersonville have sparked a younger generation’s interest.