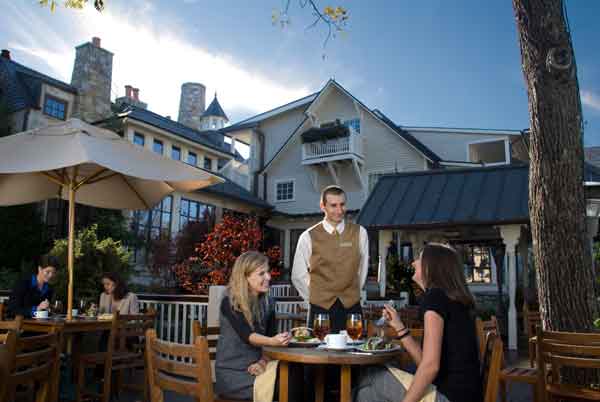 There are those who think Highlands has become too commercial, who miss the cozy shabbiness of the dowdy Old Edwards Inn—before the “Old Girl” underwent a $65 million face-lift, expanded its spa, and added a golf course. I am not one of them. Condé Nast Traveler readers picked the resort as their favorite hotel spa in the nation in 2010 (giving it an unprecedented perfect score), so I am not alone.
Yes, downtown has become crowded with touristy shops, but the nearest McDonald’s is still more than twenty miles away. And so far there’s only one Christmas shop. (Don’t mean to be a Scrooge, but I grew up in Tennessee near Gatlinburg, where year-round Christmas shops were the harbinger of dish outlets and laser tag to come.) The essential charms of the place—the longtime summer retreat of Atlantans such as the Woodruffs, Callaways, and Fuquas—remain intact.
A remarkable climate is still the top draw. At 4,118 feet above sea level, Highlands is located on the highest plateau of North Carolina’s Appalachian Mountains. In June 75 degrees is generally as hot as it gets. Abundant rainfall ensures rich flora and fauna. (It’s the self-proclaimed “salamander capital of the world,” and there are more than 750 species of wildflowers.) Despite the town’s country club pedigree, hiking is the outdoor activity of choice—not to mention canoeing, horseback riding, and fly-fishing. The Highlands-Cashiers Land Trust, one of the oldest in the country, offers popular ecotours (try the elk excursion), and the Highlands Nature Center hosts many educational programs.
The town also has a robust cultural tradition. The Bascom art center opened its new light-filled facility—complete with sculpture garden and nature trail—in 2009. This summer the Highlands-Cashiers Chamber Music Festival celebrates its thirtieth anniversary with what organizers are calling the “Dream Season” lineup, including a June 23 dinner at a private estate with Los Angeles Philharmonic Concertmaster Martin Chalifour. There are also two resident theatrical groups: the summer stock Highlands Playhouse (which this month stages Suds, a sixties-themed musical) and the year-round, community-based Highlands/Cashiers Players.
Across the street from the Old Edwards Inn, the historic Highlands Inn retains more scruffy authenticity, with iconic rocking-chair porches fronting the town’s main drag. On the outskirts of Highlands, the Inn at Half-Mile Farm is an idyllic retreat, with luxurious bathrooms and elegant breakfasts garnished with fresh-snipped herbs. You may never want to leave the porch’s white rattan rockers, which overlook a lake and a sloping lawn bordered with coneflowers, pentas, bee balm, and black-eyed Susans—all dancing with butterflies. It’s a placid scene right out of a John Constable painting.
Highlands also has five restaurants that have won Wine Spectator awards and offer a variety of cuisines: Wolfgang’s Restaurant & Wine Bistro, Ristorante Paoletti, On The Verandah, Lakeside Restaurant, and Madison’s. They’ve all been around for nearly two decades or more—testament that Highlands hasn’t changed that much.